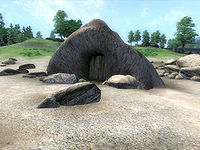 Memorial Cave is a small cave southeast of the Imperial City containing vampires (quest-related). It contains only one zone, Memorial Cave.

The primary use for this cave is as part of the quest "The Order of the Virtuous Blood", but Phintias of the First Edition gives a little extra background on the cave's history. There are two paths to take you deeper into the cave once you reach the first enemy. Going straight ahead leads to a few enemies and minor loot chests, while taking a left leads to the majority of enemies in the cave, but also to the dead captive (C) and boss chest (B). The small light blue dots on the map near (B) are ropes dangling from the ceiling with skulls attached. Seridur also appears near (B) if you decide to spare Roland during the aforementioned quest.