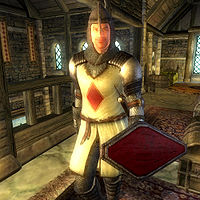 Geimund is a Nord knight added by the Knights of the Nine official plug-in.

Before being knighted Geimund may wear an iron cuirass, a pair of leather boots, and sack cloth pants. He carries a collared shirt and a pair of rough leather shoes. In combat he will use an iron claymore. After being knighted he will wear chainmail boots, gauntlets, greaves, and helmet. He also wears a Knight of the Nine Cuirass and carries a Knights of the Nine Shield.

When you first speak to Geimund he will greet you by asking if he and his brother could join your order; "Hail, Sir Knight! My brother and I have heard that you are founding a holy order of knights, and we would like to offer you our swords. We've come all the way from Skyrim to join up. We can't claim any experience as knights, but we learned soldiering from our years in the Legion. Will you have us?" If you agree that they are worthy to become members of your order he will thank you for accepting him, and inform you that he will change into proper attire for a knight: "You won't regret it, sir. You'll find us true-hearted and brave. I'll be back as soon as I've outfitted myself." If you deny his request to join your order he will humbly accept your decision, and will also claim that you will eventually change your mind about them: "You're the commander. We know how to take orders. But I know that one day we'll earn your trust." Speaking to him again after you reject him will lead to him asking if you had changed your mind, "My brother and I still hope to serve the gods as Knights of the Nine. Have you changed your mind? Will you induct us into the Order?" offering you the same choices as the last time you spoke.