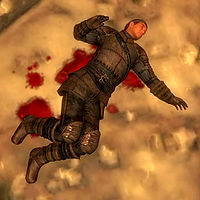 Eduard Hodge was an Imperial bard and a member of the Fighters Guild. Eduard had a special friendship with Viranus Donton, son of Fighters Guild leader Vilena Donton, and they were both sent on a routine mission to Forsaken Mine to clear the place of trolls.

During the related quest you will find both Eduard and Viranus dead in the southernmost chamber of Forsaken Mine Lost Passages, with no other evidence but Viranus' journal. It tells the tale of their life-long friendship and hints at a homosexual relationship between the two. The journal also contains details of what caused the unexpected massacre. It ends with the line: "Eduard fought bravely. All did. Rest now"

He was equipped with an almost full set of leather armor, missing the helmet and shield. Eduard has a never-used leveled spell, either a Chameleon, Silence, or Invisibility one.