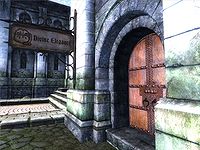 Divine Elegance is an upmarket tailor located in the Imperial City Market District It is found across the street from Edgar's Discount Spells and the Office of Imperial Commerce and next to the Mystic Emporium.

The proprietor, Palonirya, has 1200 gold and a Mercantile skill of 80. She sells a wide variety of upper and middle class clothing and buys your clothing and jewelry. She also offers Master level Mercantile training, provided that you have finished her quest. Her wares also include the unique Quicksilver Boots, which drain your heavy and light armor while fortifying your speed and agility. Note that your Mercantile skill must be over 50, as without the Journeyman-level perk, Palonirya doesn't sell armor. 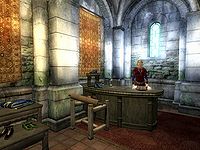 The main trading room is located on the ground floor and consists of a counter and a selection of Palonirya's wares on display. Obviously relying on her good reputation in all of Cyrodiil, Palonirya hasn't found it necessary to display too many of her designs, as the shop appear simple in its arrangement. The front door opens a set of shelves along the southern wall with seven rolls of folded cloth. More cloth can be found on the two racks along the stairs.

Opposite the racks, there are two sets of upper class clothing on display: a red velvet garment, a blue velvet outfit as well as a more common pair of light brown linens. There is also a selection of shoes: pigskin shoes, gold trimmed shoes and green velvet shoes. On the counter, a quilted doublet and a bronze amulet are carefully laid out. There are also two pairs of blue suede shoes on display, one of which has been placed on a small podium. 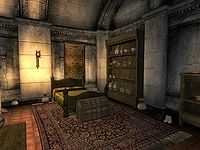 The Private Quarters is located upstairs and is part bedroom and part dining room. The room showcases Palonirya's sense of good design and everything is meticulously placed where it should be. The door opens to the sight of a well-dressed dinner table, and on the plates you will find a cheese wheel and a wedge, as well as two apples. There is also a bowl with eight blackberries and two bottles of Tamika's West Weald Wine.

Next to the table, some shelves with clutter and a copy of The Eastern Provinces, and on the floor, a pair of gold trimmed shoes, rare white mage's shoes, and a sack with clothing. The next set of shelves contains clutter and a considerable collection of silverware, and the unlocked chest at the foot of the bed has a good chance of some gold, jewelry and even more silverware.

Next to the head of the bed, there are two sacks holding clutter and clothing. In the alcove, a cupboard holds several pieces of expensive clothing, as do the drawers. The lectern holds writing materials, and the unlocked chest holds two or three pieces of randomly chosen equipment.

Nearly all containers here are safe, with three exceptions: the cupboard and the two drawers. 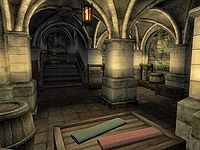