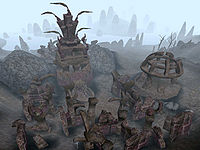 Zergonipal is a shrine to Malacath near the beach, on the mainland south of the Rotheran stronghold and just beside Bthuand to the east. 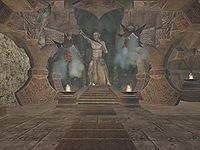 The shrine itself is guarded by another two Orcs, a warrior, and an agent named Shelur gra-Yargul. She is a medium trainer in Light Armor, Sneak, and Acrobatics, provided you can calm her down.

The altar holds frost and fire salts, a piece of raw ebony and a diamond as well as a cursed daedra's heart. Behind the altar is quite a bit of loot. There are two trapped chests, one unlocked containing some gems and weapons and the other locked containing an assortment of random magical items, potions, and books. In between these chests is a table which holds the Heavy Armor skill book 36 Lessons of Vivec, two summon scrolls for a golden saint and a flame atronach, potions of dispel and detect creatures, and a quality potion of fire shield. 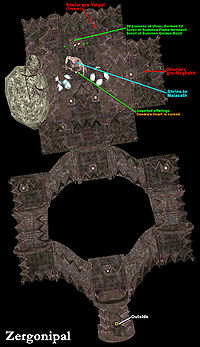