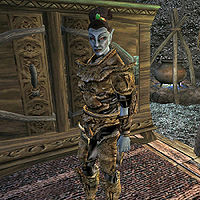 Uupse Fyr, a Dunmer spellsword, is one of the four "daughters" of Divayth Fyr. She is actually a female clone of Divayth, and according to Divayth Fyr is a "side benefit of (his) experiments into corprus disease." She helps with researching the Corprus disease and takes care of those infected. Uupse can be found in the Corprusarium Bowels in the company of Yagrum Bagarn.

She has three "sisters", Alfe, Beyte, and Delte.

She is wearing a near full set of Bonemold, including the cuirass, both pauldrons, both bracers, greaves, and boots. She is wielding a silver war axe. Aside from her natural resistance to fire and the sanctuary provided by her ancestors, she knows no spells.