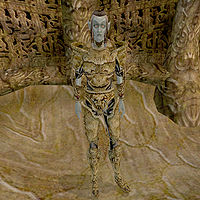 Alfe Fyr, a Dunmer spellsword, is one of the four "daughters" of Divayth Fyr. She is actually a female clone of Divayth, and according to Divayth Fyr is a "side benefit of (his) researches into corprus disease". She is believed to be the smartest of the sisters. She can be found in the Hall of Fyr.

She is wearing a near full set of Bonemold, including the cuirass, both pauldrons, both bracers, greaves, and boots. She is wielding a silver war axe. Aside from her natural resistance to fire and the sanctuary provided by her ancestors, she knows the following spells: Crushing Burden, Crushing Burden of Sin, Cruel Weary, Wild Levitate, Sleep, Absorb Willpower, Blood Despair, Masterful Red Wisdom, Powerwell, Orc Strength, Poet's Whim, Variable Resist Corprus Disease, Slowfall, and Masterful Red Wisdom.

"I suppose you want to speak to Divayth Fyr? Have you got corprus disease? Or were you planning to plunder the dungeon?"
"Go talk to Divayth Fyr. He's the one you're looking for."

"If you've got the disease, go down to the dungeon with all the other monsters."

"You're smart. Get corprus disease. Get killed by corprus monsters. Get killed by Vistha-Kai. A very good plan. Plunder the dungeon of a 4000-year-old wizard. What could be easier?"