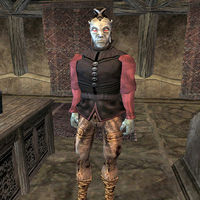 Banor Seran, a Dunmer publican, is a Tough for the Camonna Tong. He is the publican at the Council Club in Balmora, and thus sells food, drinks, and beds (10 gold) to all visitors. He will donate one bottle of Cyrodiilic Brandy for the Fundraising Dinner, but only if you raise his Disposition to 90 or higher, which is not easy to do, since the Camonna Tong is more than usually unfriendly towards outlanders. Banor is also the only person at the Council Club that Larrius Varro does not want killed. Though he won't mind too terribly if you do.

He wears a common shirt, pants, shoes, and amulet. He carries an iron warhammer along with another pair of common shoes. Aside from his natural resistance to fire and the sanctuary provided by his ancestors, he knows no spells.

(Disposition at least 40) "Good day. I'm Banor Seran, publican of the Council Club here in Balmora. We rent beds, and I have a limited selection of goods for barter. If you're new here, I can also tell you where to look for other services, or a specific place nearby. If you're looking for someone in particular, I may be able to help."

"Very good. Go down the stairs. The room on the right is yours. I'd avoid the left room, the man there wishes to be undisturbed.." (Disposition up by 2) (You pay 10 gold)

"Five bottles of Cyrodilic brandy? For the Imperial cult? Do I look like an Imperial stooge to you? Get out of here."
(Disposition at least 70) "You seem a decent sort. If stupid. Let me make myself clear. No brandy for the Imperial cult, imported or otherwise. Do you understand me?"
(Disposition at least 90) "Against my will, I'm impressed by your lack of courtesy and good sense. Here. This is a bottle of Cyrodilic brandy. A small price to be rid of you. Now, go away. And stay away."
"You're being tiresome. Go away."