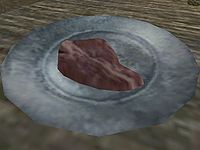 "Rat meat is tough and greasy, with an unpleasant odor and taste. Nonetheless, it is cheap, abundant, and nutritious, and palatable when cooked in a stew and masked by strong strong spices."

Rat meat is found by killing rats, which can be found virtually everywhere. It is also a common food item in taverns and people's houses. Rats are so common and easy to kill that it should be no trouble at all to find far more meat than you'll ever have a use for (especially given that the effects are not very impressive). Synnolian Tunifus will ask you for some samples of it during the Gathering Rat Meat quest for the Imperial Cult.

In case there just aren't enough rats out there for you, or you're really lazy, the following vendors carry a restocking supply: