The UESPWiki – Your source for The Elder Scrolls since 1995
< Lore: Factions: D(Redirected from Lore:The Triad)
Jump to: navigation, search

The Daedric Triad (also simply the Triad), was the alliance between Daedric Princes Nocturnal, Mephala, and Clavicus Vile. In 2E 582, they launched their plot to gain influence on Nirn and bypass Sotha Sil's Coldharbour Compact.

Around 2E 582, Barbas and his Clavicus Vile carried out an elaborate plot to gain access to the Clockwork City. Barbas began tampering with the construction of Vivec City, eventually disposing of Tribunal Temple Archcanon Tarvus and impersonating him.[1] They used a powerful staff created by Sotha Sil, Sunna'rah, to steal Vivec's divine energy and use it to discover the Clockwork City's location. They succeeded, and Barbas entered the City to arrange Clavicus Vile's arrival, but was stopped by the Vestige and the mage Barilzar, who pursued him into the City.[2]

Due to Barbas draining him, the moon Vivec held in place, Baar Dau originally rested higher in the sky, but plunged dramatically and remained aloft only tenuously, showering Vivec City with burning fragments. After Vivec regained his power, he kept Baar Dau in its new position, just above the High Fane of the Temple Canton.[2] 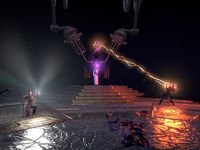 Nocturnal and the Shadow then attempted to seize control of the Clockwork City by using the key to try unseat the real Sotha Sil from his Throne Aligned, and have the shadow take control of the Throne. The Vestige and Luciana intervened and defeated the shadow in combat, but Nocturnal had her shadows envelop the area as a countermeasure, in an attempt to consume the heroes. Proctor Luciana Pullo would not yield, and at the last second would use her shadow-banishing light to keep Nocturnal's shadows at bay. Divayth Fyr also arrived at the last second and kept Sotha Sil alive and constrained the shadow. They bought the Vestige enough time to be able remove the Skeleton Key from the Throne Aligned and awaken Sotha Sil. Sotha Sil would then reunite with his shadow and banish Nocturnal from his realm.

Luciana collapsed from exhaustion as a result of the fight but fulfilled Sotha Sil's prophecy that she would someday shine a light. Sotha Sil offered the Vestige a Boon for their aid, but it is unknown if they were tempted with acquiring power or chose to save Luciana and delay her eventual death into a later time. Sotha Sil gave the Skeleton Key to Divayth Fyr for safekeeping and returned to the Cognitum Centralis to make preparations for the Daedric Triad.[3]

As part of the Daedric Triad's endgame, they conceived a plot to steal the Heart of Transparent Law, making an alliance with the Abyssal Cabal, a group of Sea Sload who wanted to reclaim the island for their underwater kingdom of Ul'vor Kus. K'Tora if the Cabal was to make Iachesis—the leader of the Psijic Order—steal it using mind magic. Iachesis, however, managed to hide the Heart within himself. Circa 2E 582 the three Princes discovered this and killed Iachesis. However, Nocturnal betrayed the other Princes by taking the Heart for herself. Using a technique she stole from Sotha Sil involving utilizing life energy as a power source, she planned to steal the life energy of Nirn, and then the energy of the other Daedric Princes afterwards, to amplify the Crystal tower to make her power limitless.

Nocturnal's plan was foiled by the Psijic Order and the Vestige, assisted by the two betrayed Princes and a champion of Meridia. Clavicus granted the Psijics access to the Crystal Tower's counterpart in the Fields of Regret, while Mephala permanently merged the two Resolute Diamonds together into the Resolute Anchor so that they could enter the Tower without Nocturnal destroying them. Once inside, the divine power of Meridia's Dawnbreaker was used to restore Transparent Law and end Nocturnal's plot. As a side effect of this battle, however, the merging of the Resolute Diamonds meant anyone would be able to enter the Tower at will.[4]

As the Princes were not bound to Sotha Sil's Coldharbour Compact, he negotiated with the Clavicus Vile and Mephala to agree to it.

This Lore-related article is a stub. You can help by expanding it.
Retrieved from "https://en.uesp.net/w/index.php?title=Lore:Daedric_Triad&oldid=2562721"
Categories:
Hidden categories: