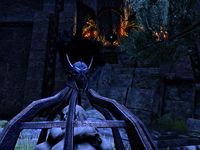 The Rilis Helm is an Aldmeri helmet that comes from the royal House Rilis of Firsthold, who hail from the Summerset Isles. The helm has been passed down for generations to the scions of the Rilis Clan,[1] but only the pure-blooded scions are able to wear the helm and use it to its full potential.[2] Several accounts from the Rilis Kinlords indicate that they undergo a feral-like and violent state. Those that are not a direct descendant of the royal family turn into a feral werewolf.[3][4]

The Rilis Helm traces its origins to the very first of the royal line, High Kinlord Rilis I, who described it as the clan's power source, but their curse.[3] The next one to wield it was his son, Rilis II. The helmet was kept away by his uncle for many years, that was until Rilis II ripped his throat on his birthday.[5] Next it was Rilis III, who wore it during the Battle of Ten Maws, where he had slain his son with nothing but his bare hands.[6] Following his death, his wife wore the helm but disappeared and was never found again. The only thing left was the helm, and it is unclear if the son, Rilis IV ever wore it.[7] Another member of House Rilis wore it after being convinced by his brother, Rilis V. The High Kinlord later led the mob that killed him.[8] Each of the High Kinlords that came afterward, as far as Rilis XII.[4]

It is unknown whether Rilis XIII (reign circa 2E 582) ever wore the helm, but it was kept deep in the vaults of Castle Rilis, the clan's ancient home found off the coast of Auridon. The High Kinlord's half-brother, Sorondil traveled to Castle Rilis to claim the helmet and his birthright but was barred entrance by the spirit of his father, Rilis XII. With the help of a wandering traveler, he was able to traverse the inner vaults. Throughout his journey through the halls, the spirits of the past Kinlords attempted to warn and persuade him from wearing the helm, but it was all in vain. The half-blood donned the Rilis Helm, only to turn into a vicious werewolf, slain moments later by the traveler. The helmet was left in the ruins ever since, along with the corpse of Sorondil.[4]