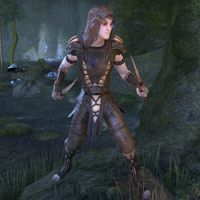 The Keerilth Clan are one of the four vampiric clans that inhabit the province of Valenwood. The Keerilth are known for their affinity of using and transforming into mist. However, they cannot travel far in their mist form and they vaporize once they are underwater. At one point, they were confronted and hunted by Movarth Piquine, a vampire hunter that tracked various clans across the provinces. Through his confrontation, he learned many things on the Keerilth, among this was their weaknesses.[1] The Keerilth are not known for hunting the living as prey, rather indirectly through the Hoarvor, who feast on them constantly. In fact, the Keerilth keep to themselves, away from the populous.[2] They are known to live in the region of Greenshade, specifically in the Shademist Moors.

In 2E 582, the Keerilth Clan were approached by Vicereeve Pelidil, the then leader of the Veiled Heritance, who promised them immeasurable power and the end of their constant hiding. He taught them an accursed ritual that utilized the Skull of Vangarion, an ancient vampire to control an unlimited supply of thralls. Many members followed through with this agreement and formed an alliance with the Veiled Heritance.[2] Thus the land surrounding Longhaven became tainted by this dark magic, and several people were enthralled to enter the moors, promptly feasted on. The strange activity caught the attention of Mel Adrys, who delved into Shademist Moors and tracked the vampire coven in the old sea coves. Together with another wandering traveler, the two were able to disrupt the ritual, kill the heritance supporters, and save Longhaven.[3] All the while, the Keerilth Clan have done mercenary work in a place known as the Glittering Grotto, where they often clashing with the Thieves Guild for their valued gemstones.[4]