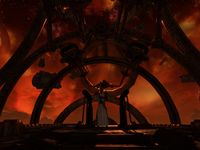 The Cogitum Centralis is Sotha Sil's seat of power in the Brass Fortress.[1] It is located in the maintenance tunnels and subterranean chambers of the Mechanical Fundament underneath the Fortress.[2] It has an automated defense system, and is controlled by a master factotum that is tasked with protecting the Throne Aligned, the control center of the Clockwork City.[3] The Cogitum was designed to be virtually impenetrable.[4] The Throne Aligned is also where Sotha Sil stored his thoughts and notes, and is deadly for a mortal to access.[5]

In the late Third Era, Sotha Sil inhabited the control center known as the Dome of Sotha Sil and was guarded by two imperfects, giant factotums. It was also the place where Sotha Sil met his end at the hands of Almalexia.[6][7] It was part of the sections the Nerevarine traversed in the Third Era. Those sections include the Maintenance and the Outer and Inner Flooded Halls; the Halls of Delirium, Theuda, Sallaemu, and Mileitho; the Central Gearworks; the Chamber of Sohleh; and the Domes of Kasia, Serlyn, Udok, the Imperfect, and Sotha Sil. They have been theorized to be the same place as the Cogitum Centralis.[UOL 1]