The UESPWiki – Your source for The Elder Scrolls since 1995
< Legends: Story / Return to Clockwork City
Jump to: navigation, search

The Furnace Depths: The Tools[edit]

The Tools is a location available in The Furnace Depths. It is unlocked after you've freed Laaneth and Swims-at-Night from the Piston Cavum and Submerged Aqueduct, respectively. Memory stars are puzzles that can only be completed by one specific order of actions in-game.

When you begin the battle, you'll be told to "Use the power of the divine artifacts to win this turn."

Once you complete it for the first time, you'll receive a playsets of Awakened Imperfect and Fabricate.

Sotha Sil: "The Heart has become unstable — left unchecked, it threatens to destroy the entire city. No matter the danger, I must venture into the chamber, and devise a way to contain its power."

Sotha Sil: "Success! With these tools, modeled after Kagrenac's own, I can control, shape, and even dismantle the Heart if necessary."
Laaneth: "That's it! If we can find those three tools, we can destroy the Heart and stop Mecinar!"

The following steps need to be completed in order to win the match in one turn. 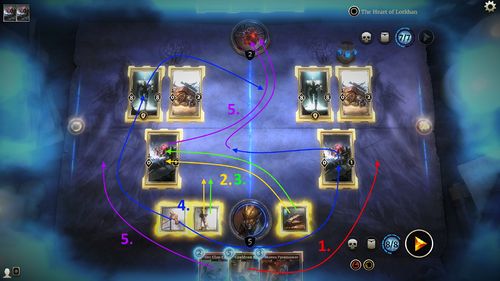 You start with 7 magicka and need to bring down the opponent's health from 2 to 0.

You start with 10 magicka and need to bring down the opponent's health from 8 to 0.