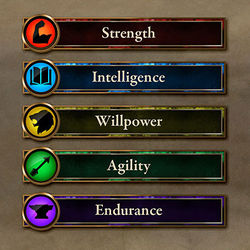 In Legends, there are five attributes that are used on cards and in decks. They are Strength, Intelligence, Willpower, Agility, and Endurance.

Certain characters and creatures will appear only on cards with certain attributes. For example, Bretons tend to appear in the Intelligence and Endurance attributes, while goblins only appear in Agility.

Here are the descriptions for each attribute as given on the official site:

Some cards are Dual-Attribute or Triple-Attribute, meaning they depend on class rather than a single attribute.

Some cards are Neutral, meaning they have no associated attribute and can be used in any deck.