The UESPWiki – Your source for The Elder Scrolls since 1995
< Bloodmoon: Places: Landmarks
Jump to: navigation, search 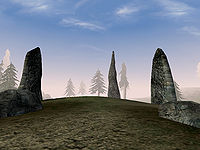 Brodir Grove is a landmark in Solstheim located on the border of the Isinfier Plains and the Hirstaang Forest. 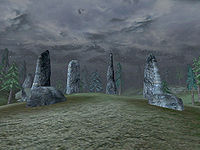 It is a small, sheltered clearing famous for the mysterious circle of large rocks, fabled to once have been great Nordic warriors who were betrayed by a companion.

Ulfgar the Unending's Dwelling is just to the north. Inside is Ulfgar, who was once the companion of the Nords now cursed to be pillars of Brodir Grove. Ulfgar slew the traitor, but was still somewhat afflicted by the spell: he is over 500 years old, and has seen all four corners of the Empire in his search for Sovngarde.