The UESPWiki – Your source for The Elder Scrolls since 1995
< Blades: Enemies
Jump to: navigation, search 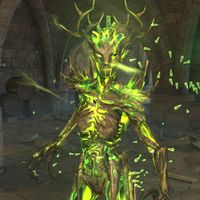 Spriggans are an enemy group that are hostile to the player. All spriggans are weak to cleaving and fire damage, while resistant to bashing, frost and shock damage. Their attacks deal slashing and poison damage, but can also cast a variety of defensive and offensive spells mostly focused on poison damage. They are one of the few creatures with an innate health regeneration while in combat.

The following Spriggans are the variants found in Jobs, the Abyss, and many other Quests