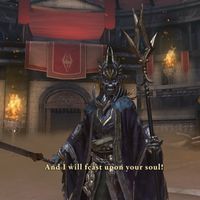 Celemaril Light-Bringer is a powerful Ayleid lich who serves as the main antagonist of the Main Quest. A Sorcerer-King of the ancient Ayleid Empire, Celemaril was sealed within the Abyss due to his desire to destroy the world. However, with the destruction of the Town's Founder's Statue and the loss of its Elder Scroll, Celemaril's bindings have come loose and he now threatens to doom all of Tamriel.

Celemaril will not surrender the Elder Scroll without a fight

Wrath of the Sorcerer King[edit]

After you have crafted the Founder's Statue and placed the five Varla Stones within it, you will have finally completed the preparations for your plan to seal Celemaril away for eternity. In accordance with your plan, the Sorcerer-King himself launches an attack on the Town and you will have to face him in the Arena north of Town. Before engaging you in single combat, Celemaril taunts you, declaring, "You cannot stop me, [Player name]... I will reign once again, and the world will be set aflame! Your loved ones will die, your cities will fall to dust... And I will feast upon your soul!"

After you have defeated Celemaril, the ancient Sorcerer-King's twisted form crumples to the ground, never to rise again.