The UESPWiki – Your source for The Elder Scrolls since 1995
< Blades: Places
Jump to: navigation, search

Town is your main hub and home base. Initially destroyed, you have the opportunity to gradually restore and improve the Town, to increase its levels and attract more people to return there. All the quest givers, crafting stations, and stores can also be found there.

The Town's default name is Rivercrest since version 1.3, though you will be prompted to rename it from Ruined Town after Rebuilding the Town Hall. There is currently no option to change this at a later point. 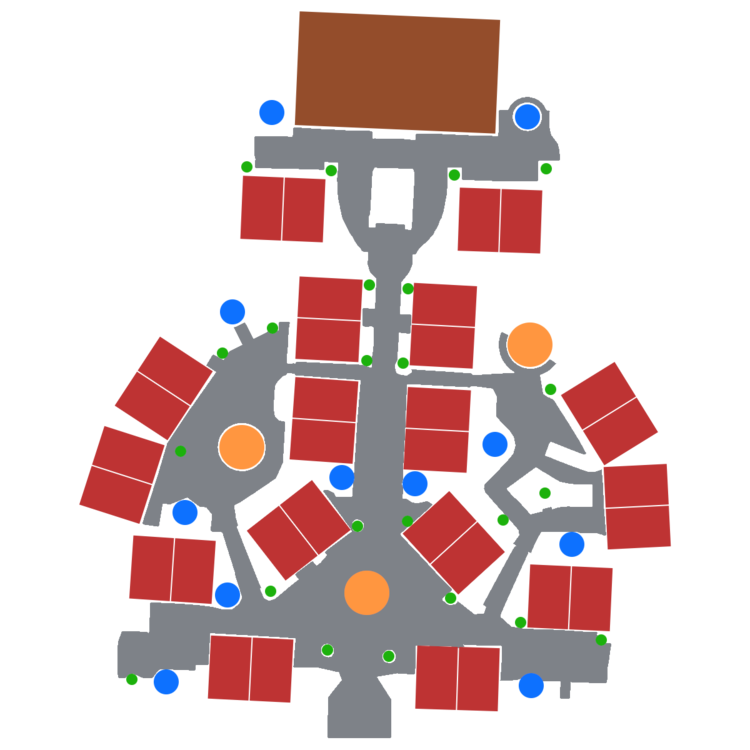 Smithy — A building occupied by a blacksmith.

Alchemy Laboratory — A building occupied by an alchemist.

Workshop — A building occupied by an artisan.

Enchanter's Tower — A building occupied by an enchanter.

House — A building that can be constructed to increase your Town's Prestige.

Homestead — A building that can be constructed to increase your Town's Prestige.

Dwelling — A building that can be constructed to increase your Town's Prestige.

To construct a building, you must approach a lot and pay the resource cost. A specific type of building costs more depending on the number of similar buildings already in your town. For instance, if you already have a Smithy, your next Smithy will come at an increased cost. Note that Houses, Dwellings, and Homesteads are all counted together for costs. They are different in appearance only, with minor variation in build times.

Decorations — Furnishing items that can be placed around the Town.

Town Hall — The centerpiece of your town.

Job Board — Your source of Jobs.
Founder's Statue — This Elder Statue depicts the town's original founder, an Ayleid prince from the First Era.

Main Gate — An existing structure at the entrance to the Town.

The Town is leveled up by gaining enough Prestige to reach certain thresholds.

Prestige is earned by building and upgrading Buildings and obtaining Decorations. When constructing a building, you gain 75 Prestige for each lot it takes. Thus the various types of home give 75 and the shops give 150. Bonuses are given for building over Ruined Buildings. Each lot cleared is worth an additional 125 Prestige over the last one. This table represents the total Prestige gained when constructing the building, already factoring in the 75 per lot mentioned above.

The townsfolk can speak a number of different lines whilst they walk around the town:

"By the Nine, is this town... growing?"
"What's SHE looking at?"
"Well, SHE'S looking nice today..."
"What's HE looking at?"
"Well, HE'S looking nice today..."
"Nice enough day. Hope it lasts."
"Fool said he saw a dragon. Rubbish!"
"Town seems to get bigger every day, I swear..."
"If I had a Septim for every new face around here..."
"To think, my cousin joined the Legion..."
"Ah, Nirnroot. Such a lovely flower."
"Did I forget her birthday? AGAIN?"
"Could do with some cold ale..."
"Feeling good. Must be those exercises."
"Bit of a chill in the air."
"What I wouldn't do for a sweetroll..."
"Withershins. Now there's a good book."
"Need to mail my friend in Daggerfall..."
"I'll get to High Rock one of these days..."
"They say the city of Alinor is lovely."
"Mournhold. Such a dreary name for a city..."
"Solitude. Now there's a city."
"I hear the Alik'r Desert is unbearably hot."
"Really like to visit Elsweyr someday."
"Wonder what it's like in Black Marsh?"
"I hear the Thieves Guild will steal ANYTHING."
"The Black Sacrament... Evil business, that."
"Another day, another Septim."
"Wish the town had a jester..."
""I hate Morndas," she said. Don't we all."
"Oh, that joke about the horker. SO funny."
"I need a hobby. Like baking. Or necromancy."
"If this town gets rats, I'm leaving."
"These are strange times we live in..."
"I really need to visit the shop later."
"Who needs guards? We've got a hero!"
"Think I'll read more of my book later."
"Hmm, venison stew. Really need that recipe..."
"Wish I could play the lute. Or even the harp."
"I wonder if he'd loan me his calipers?"
"If I had a Crown for every excuse he gave me..."
"I recall a song. The "Dragonbaby" was it?"
"Wonder if I should get a dog..."
"Cliff racers. *Shudder*"
"Goblins. Such vile little creatures."
"I'm in good health, Divines be praised."
"By Azura! I'd die to meet a Grand Champion!"
"Hope we never get Skeevers. Vile creatures."
"My cousin saw a minotaur once. Once."
"I saw some mudcrabs by the water recently."
"Imps. Hmph. Nothing impish about them."
"Hope I never see a dreugh. So terrifying."
"Wish I had a horse. I'd go... anywhere."
"Met a Pilgrim once. Weird old fellow."
"Apparently a Sload is a... slug toad? Yech."
"Wait, so you get to Oblivion through... a gate?"
"True, I dabble in magicka. I'm a dabbler."
"He's worth the Black Sacrament, that one..."
"To think, thieves actually have a guild."
"Never understood ectoplasm. Ghost slime?"
"I'd love to grow Nightshade. Is it dangerous?"
"Tired... Potion of Stamina would do wonders."
"A Gold Ruby Ring would make a fine gift."
"Can vampires be alchemists? All that garlic..."
"I really need to get that Soul Gem filled..."
"Hot bath would feel really good right about now..."
"Crazy as a cat on Moon Sugar, that one."
"Told him, lay off the skooma. But nnnnooooo...."
"Do I hear wolves baying? Never a good sign."
"Probably never leave this town. Not for good."
"What day is it again? Tirdas? Sundas? Ugh."
"My aunt, now she could bake a pie. Mmmm."
"Chamber pots? I much prefer the outdoors."
"Aedra, Daedra. Never did know the difference."
"Imagine meeting Azura. So beautiful."
"Saw a statue of Hermaeus Mora. So many eyes!"
"I swear it's true, an enchanted fork!"
"Elves make the best archers. Just a fact."
"They say Sovngarde's mead cups never empty."
"Giant spiders? Nope. I'm running. Non-stop."
"Feeling pretty good. Thank the Divines."
"What I wouldn't give to return to the capital..."
"The people here are nice, but the food..."
"I was a fool to leave the capital..."
"It's quiet here. Not like back home."