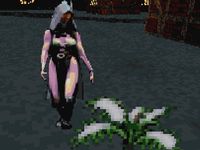 A vampire looking at a plant

Been here since Morrowind, but missed out on Oblivion. Came back for Skyrim, stuck around for Daggerfall. Annoyed the Patrollers so much, they made me one.

I was away from home for a few weeks, and no longer had access to my copy of Skyrim. Being extremely bored and needing a fix, I downloaded Daggerfall one night. The next day, I went out and bought a used copy of Oblivion. Given these two choices, Daggerfall won out. I'll admit, I didn't see that coming. So, I'd like to share the story of my very first Daggerfall character.

Prologue: Emperor Uriel Septim VII himself personally summoned me to the Imperial City. We met secretly at midnight (along with Ocato, beause someone had to hold the torch). The Emperor decided to trust me with a super secret mission just because I'd saved his son's life some years earlier or something.

His friend and Imperial loyalist, King Lysandus of Daggerfall, is dead. And now his ghost is haunting the city and screaming about VENGEAAAAANCE and nobody knows why. Uriel (we're certainly on a first-name basis) tasked me with putting his good friend's spirit to rest as a personal favor. Also something about finding some missing mail, because even in Tamriel you can't trust couriers to absolutely, positively get it there overnight.

So the Emperor threw me on a slow boat to High Rock. Evidently "I have a life of my own and am not your winged guar lackey" wasn't an option. Things went well until the weather started getting rough. The tiny ship was tossed. If not for...oh forget it, the ship smashed on the rocks and everyone else died. I found a nice dry cave and built a fire. And then, wouldn't you know it, the storm caused a mudslide and I became trapped in there. I had to find another way out...

Gameplay: I went into the next room and got bitten to death by a rat.

My second character did much better.

My other other Sandbox