The UESPWiki – Your source for The Elder Scrolls since 1995
< Tribunal: People / Merchants / Enchanters
Jump to: navigation, search 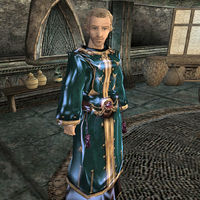 Elbert Nermarc is a Breton enchanter who offers his services to the citizens of Mournhold from the second floor of the Craftsmen's Hall in Godsreach. He seems to be missing a rather important book filled with formulas, which can be found during the Scroll Sales quest. He has also recently been seen with Golena Sadri, who has recently gone crazy, as part of The Thief quest.

His inventory is the only place anywhere in the game where the l_m_enchantitem_temple_rank8_1 leveled list is used, and therefore he is the only source for several items. Specifically, the Weeping Robe, Veloth's Robe, Robe of Trials, Robe of Burdens, and St. Felm's Fire ring can be found here and nowhere else. He is also one of only three possible sources of the Gavel of the Ordinator. Since this leveled list restocks, it is possible to check his wares repeatedly if you are searching for one of these items.

"You found what? Where? Goodness! I simply thought I'd misplaced the book somewhere. May I have it back?"

Yes, here it is.: "A great deal of work went into these formulas; I cannot thank you enough for returning them to me. You're certainly welcome back here anytime. I'd be happy to offer you a small discount on anything I have here. It's the least I can do." (Disposition up by 40)
No, I don't think so.: "I can't force you to turn it over, of course, but I spent so much time on the work in that book. Please reconsider."

"Thank you for returning it to me, %PCName."

"NO! I want nothing to do with her... wait, what? Oh, I'm sorry. I thought you wanted me to go see her. I'm not going anywhere near her again, after what happened. It was fine when she first showed up, asking about enchantments and such. But when she had me look at those strange devices, it was clear I'd gotten in over my head."
"I've told you everything I can about her. We never spoke about anything other than enchantments, and I have no idea what she intended to do. She's quite paranoid, for some reason."

After you are forced to kill Golena:

"I was sorry to hear about what happened to her. But I must say that I'm glad you're all right, %PCName."

If you killed Golena at the beginning of the quest:

"A shame about her death. She certainly had some problems, but I still feel badly."

"Yes, as I said, it started out with simple questions. She'd show up every now and then, acting a little odd, asking about what would be involved in enchanting various sorts of objects. I assumed she had a passing interest in the subject, until she begged me to visit her manor to help her with something she was working on. There were more than a dozen of them strewn about the place. I'd never seen anything like them before; maybe they were Dwemer in origin."

Continue: "I stepped closer to one to get a better look, and it shocked me. Badly, at that. Took several hours to regain the feeling in my left arm. At the time, I stumbled and fell, only to hear her laughing maniacally. She was upset that they weren't strong enough! When I'd recovered a bit, I tried asking what she was up to, and she exploded at me. Accused me of being a spy, of trying to steal from her. She ran me out of the manor, and I haven't spoken to her since, which suits me just fine."

"I have no idea whether they were magical to begin with, or if someone had altered them. Didn't care to find out, honestly. The woman scared me, and I wasn't about to go back and ask more questions. I'd steer clear of her, if I were you."