The UESPWiki – Your source for The Elder Scrolls since 1995
< Skyrim: Places: Stables
Jump to: navigation, search 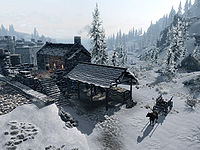 Windhelm Stables is a stable outside of Windhelm.

You can purchase a bay horse with white markings for 1000 gold from Ulundil. If Ulundil dies, his wife, Arivanya, will instead offer to sell you the stables' horses. It consists of one area only, Windhelm Stables.

Two flights of stairs (one from the stony path leading to Windhelm, and one from the carriage) lead to a small stony yard in front of the house. There is a table outside the entrance door with a wine bottle on it. Between the table and the entrance are five food sacks on the ground (two large, two normal, and one small). Beneath the stairs connecting the house and stables is one bottle of Nord mead cooling in the snow, just out of the way, and some barrels behind. The stables hold some barrels, four food sacks (two large and two normal), a wood chopping block (without a woodcutter's axe, which is to be found inside the house, on the shelves just above the strongbox), two horses (of which one is saddled), and bales of straw. Outside the stables, along the road to Brandy-Mug Farm, is a trough containing a bottle of wine next to a pile of firewood. Behind those, some crates are along the eastern wall. 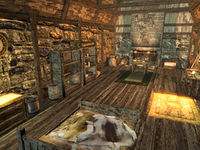 The stable building is one room only, with a double bed along the western wall. In the southwestern corner is a wardrobe with clothes, and in the opposite corner sits a dresser, also with clothes, and with the Business Ledger and a small coin purse on top. Two sets of shelves decorate the northern wall, and display a strongbox, a draught of strength, some leather strips, an iron ingot, two bottles of wine, a bottle of Nord mead, a wheel of eidar cheese, and two food sacks. Opposite the shelves, next to the front door, is a table with a few common books. The eastern part of the stable house is reserved for dining, and has four food sacks, three large and one small. The dinner table is placed in front of the roaring fireplace, which features a cooking spit. The table itself holds some assorted food, a goat cheese wedge, two red apples, and two loaves of bread.