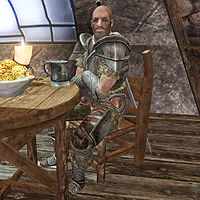 Stenvar is a Nord warrior and a mercenary living in Windhelm. He can usually be found on the second floor of Candlehearth Hall.

Upon hiring him as a follower, Stenvar becomes a potential candidate for marriage. He can also be brought to Sky Haven Temple to be recruited as a member of the Blades.

Stenvar may greet you with "Well, look who it is. Been keeping out of trouble much? I hope not!" or "If you need some skulls crushed, I'm still available for hire."

When told to follow, he will eagerly say, "Good! Let's go find something to fight" But when told to wait, he will be more sedate, saying, "Patience isn't exactly my strong suit, but alright." And when told to leave, he will jibe, "You're letting me go? What's wrong, is my skill with a blade making you look bad? Hah! I'm kidding, friend. Until we meet again!"

If you ask him to trade items, he will half-joke, "Sure, feel free to hand me all the gold you want."

Stenvar seems to dislike caves as when you are in one he comments on how he can't stand the chill; when you are outside the entrance of one he says: "A cave, dark and dangerous."

This Skyrim-related article is a stub. You can help by expanding it.
Retrieved from "https://en.uesp.net/w/index.php?title=Skyrim:Stenvar&oldid=1423910"
Categories:
Hidden categories: