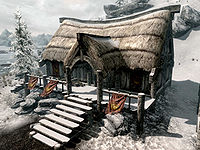 Silus Vesuius's House is the home of Silus Vesuius and a museum dedicated to the Mythic Dawn.

The house is located on the north side of Dawnstar, close to the coast line. It is the last house in the row to the left of Beitild's house. It is inaccessible until you reach level 20. It consists of one area, Silus Vesuius's House.

The southeastern end of the house is Silus' living area and contains a stone fireplace opposite the door with a cooking pot to the right on the hearth with a hanging rack holding three rabbits above. There are several pieces of firewood to the left on the hearth. A wardrobe stands in the eastern corner of the room. There is a double owned bed against the southeast wall and two barrels in the southern corner. There is a small table and chair holding a bottle of wine, a bottle of alto wine, a large coin purse, three carrots, two loaves of bread and two chicken's eggs.