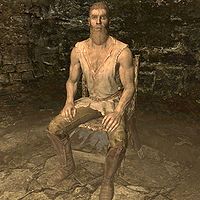 Salvianus is a retired soldier who fought in the Great War between the Thalmor and the Empire. He subsequently went mad and moved into The Ratway Warrens (below Riften). He spends his days sitting in his cell drinking, eating bread or sleeping on his mat. In his room, which he never leaves, is an Imperial Officer's Helmet, a randomly enchanted iron dagger, a leveled potion of Pickpocketing, and a leveled potion of Light Feet. He is one of the two inhabitants of the Warrens that do not turn hostile when entering their room.

Many of his quotes seem to reference the fall of the Imperial City. "Dead" but "golden" refers to the yellow skin of the Thalmor troops, the medal was for his service in the war, while Lake Rumare is the lake surrounding the Imperial City. If you go to Salvianus after you find Esbern when the Thalmor Wizard attacks, he will shout "No, you can't be here! You're all dead! I already killed you over and over!"

This Skyrim-related article is a stub. You can help by expanding it.
Retrieved from "https://en.uesp.net/w/index.php?title=Skyrim:Salvianus&oldid=1937464"
Categories:
Hidden categories: