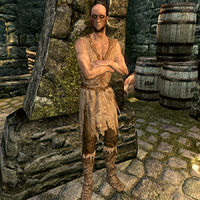 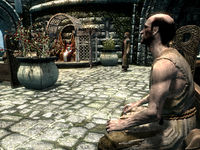 Noster Eagle-Eye is an Imperial beggar and war veteran who fought in the Great War but now lives in the streets of Solitude. He was on the battlefield when the Aldmeri Dominion attacked Anvil. During that battle, he was injured, lost his eye, and left by his comrades for dead. Due to his injury, he could no longer make a living and now lives destitute in Solitude. He possesses extensive knowledge on how to move in the wilderness and is willing to share that knowledge with you if a prized helmet he lost can be recovered.

When you enter Solitude for the first time, you will find Noster in the crowd witnessing the execution of Roggvir. If you try to talk to him, he will reveal his doubts about the execution: "A man opens a gate and they cut his head off? Doesn't seem right to me." Once Roggvir is dead, Noster will start his daily routine in Solitude. He never sleeps and spends the majority of his time leaned against the pillar outside Radiant Raiment, begging the townsfolk for gold. He only travels to a different spot at 1am when he spends three hours begging in front of Angeline's Aromatics. The only exception to this routine is when he participates in the wedding during the quest Bound Until Death.

Noster wears some ragged robes along with a pair of ragged boots. He wields an iron dagger and carries a belted tunic along with a selection of lower-class loot and gold.

When you get near him, he will tell you about his past right away: "Spare some gold for a veteran?", "I hid here in Solitude for a long time but war, war follows a man until it's done with him." and "Them Imperials left me to die in Anvil, and I had to fight my way back home. Then they followed me back here!" If a Solitude citizen passes by, he may also ask: "A coin or two for a veteran? It's not much to ask..." and "You know you can afford a septim or two." When you engage in conversation he will greet you differently: "Can you spare a septim? Lost an eye during the Great War, or I'd earn it myself..." While it is obvious that Noster saw his fair share of injustice, asking him if he really is a veteran will make him say: "What? You see a man fallen on hard times, and you think he's been like that forever? I was there. I fought in the Great War. I was on the field at Anvil. And when I was struck down, they left me. You understand? They left me for dead. I didn't leave them." He will finish conversation with: "It's best you leave me be." or "Sure, you make your retreat and I'll make mine."

During the festivities arranged for the wedding between Vittoria Vici and Asgeir Snow-Shod, Noster will take advantage and sneak into the crowd and sit on one of the benches, saying: "Long as I stay out of the way, the guards don't seem to care about me being here." He will happily add: "I've eaten more in the last two hours than I have in the last two weeks." and "If I'm really lucky, I'll get to kiss the bride for good luck." When asked if he is enjoying himself at the wedding he will respond: "Am I! Free food and wine, and nobody trying to throw me in the dungeon. I wish they did weddings here every day." However, once you have done your duty for the Dark Brotherhood, Noster will run around in a state of panic, yelling: "I didn't do it! You saw! I didn't do it!"

When you ask Noster to tell his story he will say: "I was the finest scout in the Legion, once. Tracked down all the places in the wilds that were causing people trouble. Lost my helmet in one of the old caves. My pretty, pretty helmet. Life just got worse after that. Kept losing things. So many things...." If you tell him you are sorry about the lost helmet, he will conclude: "So many things lost...." If you instead offer to help find the helmet, he will be grateful: "Oh, you could? I sure would love to have it again. Could show you some of my old scouting tricks." The related quest will then initiate. When you return with his precious helmet, he will very happy to see it again and reward you with a lesson in Sneak: "Look at it. That's real Nord craftsmanship, that is! Let me show you an old trick I learned as a scout. Makes it harder for the enemy to notice you."