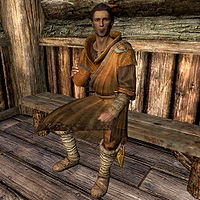 Marcurio, an Imperial destruction mage, is a sellsword and potential follower found within the Bee and Barb in Riften.

You can choose to hire him as a follower for 500 gold. Marcurio is the only hireling available in the base game who will use Destruction magic against enemies. He will also use magical staves.

Marcurio wears adept robes of Destruction and a pair of boots, and he carries an unenchanted dagger, the level of which is determined the first time you enter the Bee and Barb. Being a wizard, he knows a good amount of spells, namely, Stoneflesh, Chain Lightning, Firebolt, Lightning Bolt, Close Wounds, Fast Healing, Steadfast Ward, and Turn Undead.

After hiring Marcurio as a follower, it is possible to marry him. Once married, he can continue to act as a follower for free. He does not have a house of his own, so choosing to live in his place instead of an owned home would mean hanging out in the Bee and Barb in Riften. Marcurio can also be recruited to join the Blades.

When you initiate conversation with Marcurio, he has six possible greetings. The last two greetings can be received only if he was hired once before:

"With a master of magic at your side, you'll have nothing to fear."

"If you change your mind, seek me out here."

If you hired Marcurio recently but then dismissed him, he will say:

"Since you paid my fee recently, I suppose it's only fair that I join you once more."
Very well, let's go. (0 gold)
"Once more into danger!"

If you don't hire Marcurio, upon exiting the conversation, he will always say:

"Why settle for just stabbing your foes when you can roast them alive in a gout of arcane fire?"