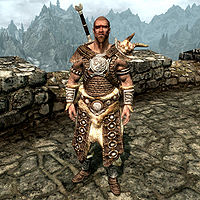 Hrongar is a Nord warrior who serves as an advisor and courtier for his brother Balgruuf the Greater, the Jarl of Whiterun. If not currently exiled by the Stormcloaks, he may greet you by saying: "All this standing around is rubbish. We should be taking the fight to the Stormcloaks." or "I'm not a man, I'm a weapon in human form. Just unsheathe me, and point me at the enemy." If Adrianne Avenicci is still alive, Hrongar may also greet you by saying: "My brother takes council from Proventus Avenicci? What a laugh. He takes council from his daughter, and she's a bloody blacksmith." He resides at Dragonsreach initially, and so long as Balgruuf remains jarl.

Hrongar wears a set of scaled horn armor with matching pairs of bracers and boots. He is equipped with an iron greatsword, and carries a selection of common loot and gold.

During the quest Dragon Rising, Hrongar will express confidence in you as the Dragonborn, in contrast to Proventus Avenicci, the jarl's steward, who is initially suspicious and skeptical of you.

He can have a difficult conversation with the steward:

Hrongar: "Proventus, you must help me. We need to convince my brother to do more for the war effort."
Proventus: "What would you have me do, Hrongar? Your brother is the Jarl. You know I can't question his judgement."
Hrongar: "I'm not asking you to defy the Jarl, just to open his eyes. Use subtlety and suggestion to turn his thoughts to the war. You're his steward, he'll listen to you."
Proventus: "Leave me out of your intrigues, Hrongar. If you have something to say to the Jarl, say it with your own tongue."

A conversation between Proventus and Hrongar that seems to have been recorded for when Hrongar became Jarl (see notes):

Proventus: "My lord Jarl, if we do not take steps soon, our coffers will be empty."
Hrongar: "Raise the taxes, then! Put anyone that refuses to pay in the stocks and make an example of them."
Proventus: "As you command, my lord. But, the issue could be solved another way. If we spend less on new arms and armor for the guards, for example..."
Hrongar: "We're at war, old fool, or have you forgotten? Whiterun is the crown jewel of Skyrim, and you would leave us defenseless?"
Proventus: "Forgive me, my lord. It was foolish of me to make such a suggestion."

This Skyrim-related article is a stub. You can help by expanding it.
Retrieved from "https://en.uesp.net/w/index.php?title=Skyrim:Hrongar&oldid=1774429"
Categories:
Hidden categories: