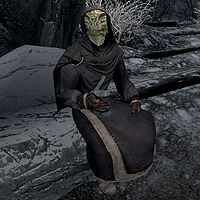 Beem-Ja relaxing with a drink

Beem-Ja is an Argonian sorcerer who sits at a small make-shift campsite just outside of Ironbind Barrow alongside his adventuring partner, the Redguard Salma.

As you arrive at Ironbind Barrow, you will notice Beem-Ja and Salma at their campsite and overhear them argue about whether to enter the barrow.

Salma: "How can you just sit here and wait? We should be in there!"
Beem-Ja: "We must gather our strength. Who knows what's inside?"
Salma: "Treasure, that's what! Get off your scaly rump and let's go."
Beem-Ja: "Hush, Salma. We aren't alone."

If you approach him after this conversation, he'll direct you to talk to Salma and express frustration.

"Speak with Miss Salma, if you wish to speak."
"I grow tired of debating this. If Miss Salma insists on this folly, so be it."
"I admit, there is strength in numbers. Perhaps between us..."

After telling Salma that you plan on entering the barrow, Beem-Ja and Salma will run into the barrow with you.

If you attempt to talk to him while in the barrow, he will say:

Once you clear out the spiders in the ice caves and approach the tomb, he will say:

"This is it. We've found Gathrik's tomb."

As you approach the closed gate ahead, he will say:

"Well? There must be a way through. Look around."

After you progress further through the tomb and enter a hallway with a helmet on a pedestal, he will caution you:

As you get close to the final chamber, Beem-Ja will continue to reveal suspicious knowledge about the barrow.

Beem-Ja: "This is it! Gathrik awaits us!"
Salma: "What are you on about? Let's just get the treasure here and go."

After Gathrik is defeated, Beem-Ja will run up to you and reveal his true colors:

"Fool. I should thank you. I knew the girl wouldn't be strong enough to help me kill Gathrik alone.
There's just one more thing I need from you. To fully absorb Gathrik's power I require a blood sacrifice.
Your blood should be good enough. This will go easier for us both if you don't bother fighting back."

He will then proceed to attack you and you will have no choice but to kill him.