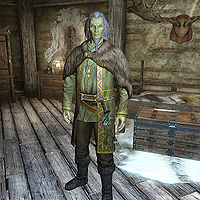 Aringoth is the Altmer owner of Goldenglow Estate, a bee farm outside of Riften which used to supply honey to the Black-Briar Meadery. The Thieves Guild made sure the operations ran smoothly and would extort considerable payment from Aringoth. Lately, he has stopped shipments, fortified the island and hired an army of mercenaries, infuriating Maven Black-Briar and causing the Guild to single him out for punishment.

Befitting his status, Aringoth wears fine clothes and boots. He is armed with a leveled dagger, leveled bow, and up to 144 arrows of various qualities up to daedric, all limited by your level. He also carries a key to his cellar, a key to his safe and up to 45 gold coins.

Once you've broken into the estate, Aringoth will be found crouching in his room on the second floor. As soon as you come close he'll spit:

"Worthless mercenaries. I didn't think Maven or Mercer would allow me to get away with this, but I had little choice."
I just want the key to your safe.
"I can't. If I do, I may as well cut my own throat."

What makes you think I won't? (Persuade)

New owner? What are you talking about?
"I've already said too much. I gave you what you came here for, now go. Leave me in peace."

Then I'll take it off your corpse!

"Give it your best shot!"

Forget it. I'll just open it myself.

"No! I'm not about to let you ruin everything I've worked so hard for!"

If spoken to again if you got the key from him peacefully: