The UESPWiki – Your source for The Elder Scrolls since 1995
< Skyrim: Places: Apocrypha
Jump to: navigation, search 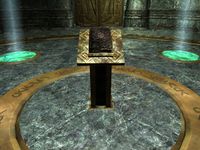 Epistolary Acumen is an area of Hermaeus Mora's plane of Oblivion, Apocrypha. There are four zones in the area, namely Chapter I, Chapter II, Chapter III, and Chapter IV.

The Black Book needed to access Epistolary Acumen is found inside Nchardak. You must complete the quest The Path of Knowledge in order to retrieve the book.

The realm is inhabited by Daedra called Seekers and Lurkers. Tentacles constantly breach the acidic dark waters and sometimes whip at you, causing a significant amount of damage if they manage to hit you. The acidic waters with the tentacles are also corrosive and cause damage if stepped in.

The first part of Chapter II is fairly straightforward, a single straight corridor to a scrye. Things get a lot more dangerous when the scrye is activated; the corridor unfurls, revealing two seekers and a lurker. To the east is a font of magicka, and a scrye that opens the gate to the west, there is a pod in the southeast corner, and a table with two random soul gems in the southwest corner. On either side of the gate is a font of magicka. Inside the small room there is a pod to the right, two fonts of stamina, and the book to Chapter III.

There are another two separate platforms on this side of the corridor. The first has a lurker, and drops down to another platform with two seekers. Dropping down onto the platform activates several parts of the structure in the middle to lower, giving access to a pod atop a pillar. There is a scrye to the south that raises a bridge back to the first platform. The third platform, guarded by two seekers, contains a pod flanked by two fonts of magicka and two tables. On the left-hand table are a few random soul gems, including a black soul gem. The right-hand table holds a copy of the Spell Tome: Conjure Seeker (only if your conjuration skill is above level 40), and copies of three skill books, Fire and Darkness (One-handed), Orsinium and the Orcs (Heavy Armor), and Death Blow of Abernanit (Block).

To the south is a corridor that can be reached by using Whirlwind Sprint while standing on the guardrail. This corridor is the end one of the Chapter, and allows you to skip ahead to the corridor with the four seekers.

Back in the corridor, and now going all the way through it, there is a scrye to open the gate in the middle. There is a seeker at the far corner, and when the corridor swings around and connects to the platform, a lurker. The next corridor swings to the left and connects with a platform, where there is a scrye to open the gate. The corridor leads past a font of stamina to room with some old pedestals. The corridor past this is guarded by four seekers. There are two fonts of stamina and two of magicka, plus the book to Chapter IV.

Immediately to the right is a table with three soul gems (two random and a black). There is a pod and scrye ahead, which opens a central chamber high in the air. The Epistolary Acumen book is in the middle of the room, and it allows you to access its secrets. When the book is activated for the first time, Hermaeus Mora appears, and offers to strike a deal in reward for the final word of the shout Bend Will. Hermaeus grants you the second word of the shout as an enticement. To exit this part of Apocrypha, use the non-circular part of the black book.

The three Powers offered by this book are: