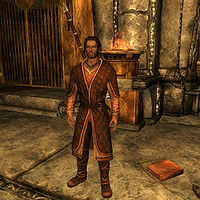 Alain Dufont is a Breton bandit leader residing in Raldbthar.

The previous lover of Muiri, it turns out that he was only exploiting her and her friendship with the Shatter-Shield clan in Windhelm. He robbed the Shatter-Shields while they were vulnerable and mourning for their daughter's death, and fled, leaving Muiri behind to take the blame. Desperately wanting revenge for her ruined reputation and shattered friendship, Muiri contacted the Dark Brotherhood to end Alain's deceiving ways.

He wields a frost-enchanted warhammer named Aegisbane and wears fine clothes along with a pair of fine boots.

As a target of a Dark Brotherhood assassination, Alain can be found either cooking or sitting in the main chamber of the Ruins of Raldbthar at any hour of the day; he will never be asleep during this time.

When he notices you in the room:

"Well. You must have all those annoying gods on your side to have made it this far, whoever you are. Even I have to admit, that's pretty impressive."

If you talk to Alain, you will be given only three dialogue options. Be aware that only one can be chosen as each ends the conversation:

After his death, guards may comment as you pass, "Hey! You're the one who killed Alain Dufont, up in Raldbthar. Oh yeah, word about that got around. Man was a piece of bandit trash, is what I hear."