A stray dog outside Falkreath

Once you reach the required level, a trip to Falkreath will net you an encounter with a guard asking a rather unusual question, namely if you have seen a stray dog running around outside town. Regardless of your answer, he will then point you to the local blacksmith, Lod, who can be found working his smithy during the day. When approached Lod will only show interest in one specific dog, a 'fine, strong creature that's been wandering near town', that he would like for you to catch for him. You can either accept his request to chase down the dog or pass a very easy Speech check to persuade him to pay you part of the gold up-front for your efforts. In either case, Lod will give you some fresh meat for bait.

Travel along the road a short distance southwest of town. A dog will approach and enthusiastically address you, saying "You are exactly what I was looking for". He will introduce himself as Barbas and will ask for your help. Choose the second dialogue option for a bit of background explanation. Barbas will describe a falling-out that he had with his master, and says that he needs someone who can settle the disagreement. Taunting Barbas will make him reveal his master to be Daedric Prince Clavicus Vile, who governs over bargains. You agree to arbitrate this disagreement and Barbas tells you that Vile is probably close to a cult of worshippers living near Haemar's Shame. Barbas will then be on his way towards this cavern, and you will have to follow him on a long journey.

Note that traveling with Barbas can be avoided by postponing his request during the second set of dialogue responses; select "You were looking for me?" followed by "I've got things to do". This will make Barbas travel to Haemar's Shame alone. You can then make your way to the shrine when you are ready. If you haven't discovered Haemar's Shame, you can travel to Helgen and head east for a relatively uneventful trip. If you choose this option, you can skip the next section.

Haemar's Shame is located a long way from Falkreath, at the foot of the Throat of the World, straight east from the ruined town of Helgen. Following Barbas can be difficult as Barbas tends to get lost on occasion, so keep an eye on the map marker. The first distraction comes when you and Barbas face an unmarked bridge guarded by bandits, just west of Falkreath. Barbas cannot be killed because he is invulnerable, so just fight the opposition and keep an eye on the dog, who may wander off. Follow Barbas past Pinewatch and up the mountain towards Helgen. The trip goes through the destroyed town, now occupied by bandits, so help Barbas fight them. When all is said and done, Barbas will open the eastern gate himself and continue towards the Throat of the World. When you finally reach Haemar's Shame, Barbas will enter right away so follow him inside.

Clavicus Vile obviously suffered the same fate as many other daedric princes, and his shrine is now hidden away in a damp tomb. His worshipers consist of leveled vampires who will protect the shrine with their lives. The first room offers an enemy guarding the wooden structure and a chest. Barbas will run ahead, so you will likely be on your own. Take the eastern tunnel and beware of the spike wall trap ahead. The next chamber contains a campfire and a charred skeever guarded by two vampires. Dispose of them and investigate the wooden structure for an alchemy lab and another chest. Take the only available tunnel to a chamber in two levels, with several enemies to fight. Take a detour to the southern chamber for some loot, and examine the table on your way down for the Destruction skill book Response to Bero's Speech, then pick the northern tunnel and exit Haemar's Cavern. 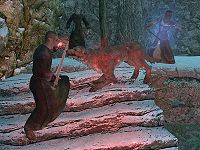 In the next zone, Haemar's Shame, head through the tunnel and kill the residing frostbite spider. An arcane enchanter can be found in the next room, along with a soul gem and common books. Head downstream and fight the opposition until you reach the Shrine of Clavicus Vile, guarded by a boss-leveled vampire. Evident by his barking, Barbas will already be there, busy fighting the boss. After the fight, Barbas will sit in front of the statue with nothing to say but the occasional "Woof". Head up to the statue, activate it, and ask Clavicus Vile if you can make a request. He'll agree to hear it by saying,

Clavicus Vile: "By all means, let's hear it. It's the least I could do, since you already helped me grant one final wish for my last worshipers... They were suffering so from vampirism, and begged me for a cure. Then you came and ended their misery! I couldn't have planned it better myself. So, what's your heart's desire? What kind of deal can we strike?"

If you mention Barbas, he will deny the request but then equivocate.

Clavicus Vile:"Ugh. That insufferable pup? Forget it. Request denied. No deal. I'm glad to be rid of him. Even if it does mean I'm stuck in this pitiful shrine, in the back end of... nowhere. Well... perhaps there is a way he could earn his place back at my side. Maybe. But no promises."

You can also ask for an end to the Civil War in Skyrim to which Clavicus will reply, "Oh, if I had my full power, granting that would be trivial. I'd simply snap my fingers, and everyone in Skyrim would die. War resolved."

You can also ask for power to which Clavicus will reply, "Really? Power? You're a dragonborn; you already have more power than most people who aren't immense fire-breathing monsters." or "Really? Power? Haven't you already killed enough of your foes using the more mundane means at your disposal? Swords, magic, etc.? How...uninspired.", depending on whether or not you have completed Dragon Rising.

Clavicus will conclude the last two options with: "As much as I hate to say it, you're almost as powerful as I am right now. But that's just because half of my power resides in that mutt, Barbas. Come to think of it, I know of a win-win situation for both of us."

Whatever option you pick, Clavicus is only interested in one thing, the Rueful Axe, an axe powerful enough for Clavicus to have "quite a bit of fun". Clavicus will reveal that the axe is located in Rimerock Burrow and will ask you to take Barbas with you.

Talking to Barbas will provide a bit of background information on the axe:

Barbas: "One of Clavicus's little jests. A wizard named Sebastian Lort had a daughter who worshiped Hircine. When the daughter became a werewolf it drove Sebastian over the edge. He couldn't stand to see his little girl take on such a bestial form. The wizard wished for the ability to end his daughter's curse. Clavicus gave him an axe." 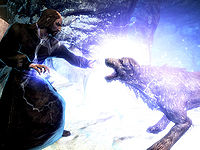 Barbas throws himself at Sebastian Lort

Rimerock Burrow is located on the hillside in the northwest corner of the map and can be tricky to find, especially if you approach it from the wrong angle. Take the road leading south from Lost Echo Cave and follow it as it twists and turns. At the crossroads, take the snowy path leading northwest and you will get straight to the entrance. You can also take the ferry from Dawnstar to Icewater Jetty, then travel southeast and scale the cliff side until you reach the entrance.

Once inside, you will encounter a hostile leveled atronach, presumably created by Sebastian Lort as an extra guardian. Sebastian himself can be found in the next room, equally hostile and will not hesitate to use his conjuration spells. After the battle, claim the Rueful Axe from the table and examine the room for a bit of loot, an arcane enchanter and the Conjuration skill book 2920, Hearth Fire, v9 on Sebastian's nightstand in the following room. It is now time to return to Clavicus Vile in Haemar's Shame.

Put Him Out of Our Misery![edit]

Back at Haemar's Shame, the map marker will point towards the cavern entrance, which will force you to travel through the entire cave system once again. To circumvent this, head west up the road until the path bends. A pine is growing on the left, against the mountain wall; the back entrance is behind this tree below the top of the tree. Reaching the back entrance is fairly easy. If you reach the first piled up set of rocks on the left, you've gone too far. Note that this only works if you previously opened the spike gate by pulling the chain behind Clavicus Vile's statue. Otherwise, the gate will be closed and you will not be able to access the room. Inside the cavern, Barbas will once again sit in front of his master. When approached, Clavicus Vile has one final prank to play and will give you a choice: you can keep the Rueful Axe if you use it to kill Barbas. The dog will understandably jump up and try to tell you that it is not the only option available. Speak to Barbas and Clavicus Vile for further elaboration and make a decision. Kill Barbas and keep the Rueful Axe, or hand the axe to Clavicus Vile and receive his true daedric artifact, namely the Masque of Clavicus Vile. Note that both items are unique, but only the Masque of Clavicus Vile counts towards the Oblivion Walker achievement, so it is recommended to keep Barbas alive. Regardless of your choice, Barbas and Clavicus Vile will be reunited and you will receive your reward. Finally, return to Lod in Falkreath for a small amount of gold and his gratitude.

Notes
* Any text displayed in angle brackets (e.g., <Alias=LocationHold>) is dynamically set by the Radiant Quest system, and will be filled in with the appropriate word(s) when seen in game.
Retrieved from "https://en.uesp.net/w/index.php?title=Skyrim:A_Daedra%27s_Best_Friend&oldid=2735735"
Categories:
Hidden categories: