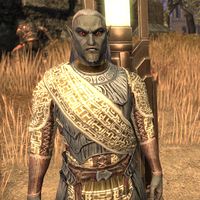 Sarvlos Velar is a Dark Elf member of House Hlaalu stranded in the Clockwork City. He can be found in the Brass Fortress, arguing with Adjunct Rizma about finding a way back to Vvardenfell.

Outside the Clockwork Basilica, you can hear Sarvlos Velar in a lively conversation with Adjunct Rizma:

When you speak to Sarvlos, he sounds determined about finding a way out of the Clockwork City:

"I'm sure House Hlaalu is spending all available resources trying to find my whereabouts. Why, I wouldn't be surprised if a rescue party showed up any day now. Any day …."
"I will find a way out of this wasteland, with or without the help of those Clockwork Apostles."
"This place is filled with lunatics, acting under the orders of an absent god. Why, if Lord Vivec ever caught wind of such disgrace going on under the name of the Tribunal …."