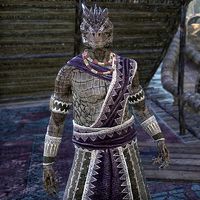 Nurhei is an Argonian trader who can be found overseeing the loading of his cargo on the Lilmoth Docks. He is one of two claimants for ownership of a nearby saltrice farm, Nurhei claims that the former owner, Keema-Ru owed him money and the farm was the collateral. Keema-Ru's egg-sister, Paheiza refutes this

As he is approached at the docks, the following can be overheard between him and his Dockworkers:

Nurhei: "Hop to, dock toads! And watch your step, this pier is made from wicker and prayers."
Dockworker (Male): "Oof. I think I pulled someting."
Dockworker (Female): "I told you to stretch beforehand, you oaf. And don't go thinking you can go convince me to rub your aching back when we're done."

When he is spoken to, he will try and dismiss you, saying he is very busy.

"I've no time to chat. It is a busy day, and I need to make sure this shipment is off before the next tide. Take your business elsewhere."
I'm here on behalf of Sulahkeesh about the saltrice farm dispute.
"The Shadowscale? I see.
My claim on that farm is as watertight as my trading vessels. Keema-Ru, may she be at peace with the Hist, owed me several debts before she departed. That farm acts as collateral. It is as simple as that."
Tell me more about these debts.
"We were business associates. I would buy her saltrice crop and sell it in far-off Senchal. The cats like to put moon-sugar on it.
When Keema-Ru fell on hard times, I offered a loan. Unfortunately, she died before it could be repaid."
Could Paheiza not pay back those debts after she inherits the farm?
"That skooma-addled kuuda couldn't tend a crop if her scales depended on it.
She may be Keema-Ru's egg-sister, but she cares nothing for that saltrice farm. It would be run into the muck before the next season. Of this, I have no doubt."

You can either say, Thanks for your time. and leave, or ask him about kuuda:

"As the dryskins would say, an idiot. You have but to speak to Paheiza once to see the truth in my words."
I'll do so. Thanks for your time.

If you speak to him before leaving, he'll only say:

"If you do not believe me about Paheiza, merely speak to her yourself. I'm sure she's already well into her cups, as they say."

Eventually you will return to Nurhei on the behest of Sulahkeesh to get him to attend the negotiations.

"Ah, my esteemed beeko! I'm sure you come with good tidings. After all, my claim is as strong as the roots of the Hist!"
You must meet Sulahkeesh at the town's entrance. But first, rub this oil on your scales.
"What? Rub oil into my scales? Whatever for?"
It's part of a Shadowscale negotiating ceremony.
"Negotiate? Is the matter not settled?
All right. I'm not foolish enough to go against a Shadowscale's command. Besides, my words are sure to sway all present."
Here's the oil.
"Good luck getting Paheiza to even bother attending. Or even speaking her case coherently, for that matter."
I happened to find some letters between you and Paheiza.
"Oh? Not surprising. We wrote a lot of letters to each other. Paheiza would often conduct business on behalf of her egg-sister."
Specifically about how you supplied Paheiza with skooma, and then indebted both sisters.
"Just what do you think you're implying? You listen to me, mud-fish, and you listen well. My business is all aboveboard, and I don't give one lick of a toad's backside what you think you found.
Now go jump in the bog."

After contacting both Nurhei and Paheiza, you can meet them at the gates to watch the negotiations. As you arrive the following will happen:

Chuxu: "Thank you for both agreeing to this negotiation."
Nurhei: "Of course! Far be it from me to deny the wisdom of a Shadowscale."
Paheiza: "Oh, please. Let's just get this over with."
Sulahkeesh: "Before we begin negotiations, I want the two of you to shake hands, amicably. To show your good intentions in coming here."
<The pair reach out and shake hands. An explosion erupts from where they touch, both are thrown backwards and are killed.>
Chuxu: "What … what happened? What did you do?"
Sulahkeesh: "What was asked of me. I resolved their dispute. I entrust the farm to you, Chuxu. You'd do best to not disappoint me."