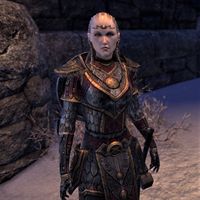 Housecarl Vaer is a Nord housecarl of Jorunn the Skald-King who is found in front of the Palace of Kings in Windhelm. She can be encountered while Jorunn inspects the renovations inside.

While heading to the palace to ensure the Skald-King's safety, Lyris will approach Housecarl Vaer only to be stymied.

You can then convince Vaer by explaining what you know.

"Who does Titanborn think she is, demanding to see the Skald-King?"
Lyris and I uncovered a plot against Jorunn the Skald-King. We have to warn him.
"Whatever you and the half-giant think you found is irrelevant. The Skald-King is safe inside the Palace of Kings. It's the most secure structure in all of Skyrim!"
One of your sentries accepted a bribe and told the Icereach Coven how to gain access to the palace.
"Hmm. Well, it's true that Sentry Darfal never arrived for his shift today. And High King Jorunn is touring the palace, but that's supposed to be a secret.
The Icereach Coven, you say?"
Yes, and they may already be moving against the Skald-King. We need to get into the palace.
"How highly irregular, but if this is true ….
King Jorunn wanted to tour the lower levels. To check on the progress of the construction. He could be anywhere. Go inside and find him at once! I'll rally the guards and secure the palace. Now hurry!"

If you speak with her afterwards.

"Well, don't just stand there. Get inside and find the Skald-King! I'll rally the soldiers and be right behind you!"