These winding tunnels were once home to a thriving fungus-farming operation. But since war has come to Cyrodiil, they've been put to darker uses. 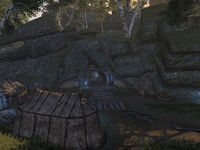 Haynote Cave is a cave in western Cyrodiil, between Castles Brindle and Roebeck containing Shadowed Path necromancers. There is a cooking fire in the camp outside of the cave. Ore, jewelry seams, runestones and mushrooms can be harvested inside the cave.

Theurgist Thelas is standing on a wooden platform within the first large chamber. A chest can be found in the hallway leading to the next chamber, at the eastern bend where the road turns north. The chest lies beyond the scaffolding, and you can pick the lock from behind the scaffolding. 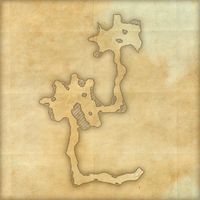 A map of Haynote Cave