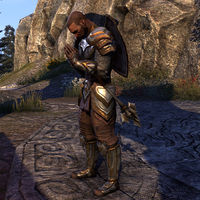 Crusader Dalamar is a Redguard crusader who can be found just outside the entrance to the Skyreach Catacombs. He requests your help in dealing with the restless dead within the catacombs.

As you approach, you'll hear him pray, "Akatosh be my resolve, Stendarr be my shield, and Arkay light my way. I must try to set things right in this foul place."

Speak with him to begin the quest.

"Beware. A great darkness infests the catacombs below and its dead no longer slumber.
I hoped to consecrate the tombs, but the danger is greater than I imagined. Something calls to the dead. It drives them into a frenzy."
Do you know the cause of the disturbance?
"Many legends tell of the ancient city of Skyreach. I remember one about a powerful Elven necromancer, Virmaril. Some believe he caused the fall of the Nedes. Others claim he still haunts the ruins below."
Could this Virmaril be responsible for waking the dead?
"Perhaps. I thought he was nothing more than a myth before I entered the catacombs. But then I heard a voice inside my mind, beckoning me into the depths.
I fled to seek the blessing of the Eight, for without it I know my soul will be forfeit."
I'll enter the catacombs and find out what has disturbed the dead.

You can ask him a few questions after accepting the quest.

"Stendarr protect you, friend. If Virmaril is the source of this darkness, then the danger is greater than I expected.
I will seek another way inside. A way that avoids that terrible, insistent voice."
What else do you know about Virmaril?

"According to the legend, Virmaril was a friend and trusted advisor to High King Durac of Skyreach. Durac depended on him for a great many things.
Virmaril used these catacombs to practice dark sorcery. He and Durac shared a passion for necromancy."
He was the High King's friend and he helped cause the downfall of the Nedes?
"Only the Perenaal Fragment tells this part of the tale.
In it, Virmaril betrayed the Nedes. He murdered the gathered kings and their guards and enslaved their souls. Without their leadership, the Nedes could not stand against the Yokudan attacks."
Why would Virmaril betray his friend?
"That's where the legends conflict with one another. But the tales agree that Virmaril offered to raise an army of the dead to repel the Yokudan invaders.
Supposedly, the Nedic kings met in secret within these very catacombs to debate the strategy."
What happened after that?
"The story is silent on the matter. It does go on to describe how a small force of Nedic warriors sacrificed everything to avenge High King Durac and trap Virmaril inside the catacombs.
How much of this legend is true, I cannot say."

Tell me more about the catacombs.

"The catacombs extend beneath the once-grand Nedic city and into the Dragontail Mountains beyond.
Besides containing the city's dead, ancient documents suggest the High King also used the catacombs to hold clandestine meetings and travel in secret."
How do I find my way through such a place?
"I studied ancient texts back in Sentinel. They suggested that passages lead deep underground to ritual chambers where necromancy and other dark magics were practiced. If there is a source to the darkness, it is certain to be down there."
Is this the main entrance to the catacombs?
"No. The sacred entryways were sealed long ago. Members of the Scaled Court opened this passage, but they were driven off by the same forces that repelled me.
Fortunately, they had no better luck reaching their goal than I."

What's a knight of the Divines doing way out here?

"I go where the Eight Divines send me. My devotion to the tenets of Stendarr and Arkay gives me strength and purpose. It was my faith that carried me to this forsaken land."
The Divines sent you to the catacombs?
"I left Sentinel to aid the common folk against the rising threat of Craglorn. Once here, Arkay led me to the catacombs. He warned me of an awakening evil that everyone else was too occupied to see."
Don't you think the Scaled Court and the Serpent are a more immediate concern?
"The Scaled Court has already tried to enter the catacombs once and make use of the power within. Better to find the darkness and banish it before the Serpent finds a way to make contact."

Returning to him after Virmaril is dead:

"I sense that the darkness within the catacombs has subsided. Tell me, did you find the source of whatever disturbed the dead?"
Virmaril the Betrayer sought to create an undead army. I destroyed the foul creature.
"Arkay bless you, for the living will rest easier now that Virmaril is gone. But I sense … something.
I will remain here. Where necromancy is concerned, who can say what is possible? If Virmaril rises again, someone will need to take action."

Speaking to him after the quest:

"Blessings of the Divines upon you. I will not forget the selfless aid you have given today—and at no small risk to yourself.
Should the time come when that dread creature stirs again, we will be ready. Until then, safe journey to you."