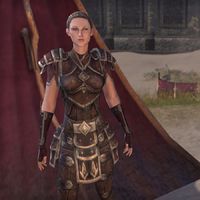 Captain Gemelle is an Imperial officer of the Seventh Legion looking for her missing soldiers found in her camp near the ruins of Nilata. After all the setbacks her company has faced in Bangkorai, she just wants to take her troops and go home.

The captain can be first found sitting wounded next to a tent. She'll shout, "Gods damn these spiders!"

When spoken to she will plead to not be killed outright.

"Wait! Please, stay your blade and listen."
What's happened here?
"Our orders were to look for Redguard insurgents in these ruins. Sounded simple enough … but then the spiders showed up. Legionnaires disappeared.
By the time we figured out what was going on, two-thirds of my company was gone. Please, help me."
You're an Imperial soldier. Why should I help you?
"We've had our fill of this whole damned campaign. Bangkorai Garrison. Hallin's Stand. Now this sand pit. I'll take my troops and go. It's simple as that. We'll head back to Cyrodiil to fight the real war. You have my word.
Will you help or not?"
All right. I'll do it.

You can ask her more questions.

"Take this ice rune. It should make the webs brittle enough for my soldiers to break free. Good luck."
Will you be all right? / Are you going to be all right?

"I'll live. Shortly after I sent out my last scout, another one of those damned spiders attacked the camp. I kept it from biting me, but it battered me with its legs.
I just … just need a minute to pull myself together."
Can you tell me more about what happened?
"One by one, my soldiers started complaining about voices … seeing things. At first I thought it was insurgents playing tricks on us. By the time I figured out what was really going on, it was too late."
So what is really going on?
"Well I'm not exactly sure, but I can tell you this—it's more than simple spiders. Something or someone is manipulating these beasts. Manipulating us. This place is evil. I don't intend to stay a minute longer than is necessary to secure my men."

"Hallin's Stand is under Imperial control. Has been for a while. Only the Eight know why we bothered taking it.
Anyway, there are supposedly rebels out here in the ruins. Supposedly. I haven't seen anything but rubble and spiders."
How did the city fall to the Empire?
"Without much trouble. The way I hear it, someone opened the gates from the inside. That's rumor, though."

Once her soldiers have been rescued, you can return to tell her the news. You will find her up and about tending to the survivors' injuries.

"My soldiers have been returning one at a time. Some still complain of numbness. Some are half-blind. But they're alive; that's what matters.
Thank you."
You're leaving, right?
"Yes, of course. To Oblivion with this whole campaign folly, and the Seventh Legion.
As you can see, my men are securing their gear and preparing for the march back to Cyrodiil. It's a long journey, but it'll be good to fight where we're needed."

If you talk to her after completing the quest:

"Don't worry. We won't linger here any longer than we have to."