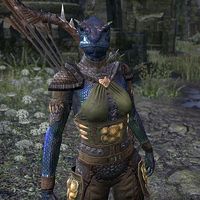 Beel-Ranu is a young Naga Argonian of the Dead-Water Tribe and recently took part in tribe's trial of ascension. It was a disaster and it was only to Kishi intervening in the trial that her group survived. She wants to help Kishu as he was sentenced to death for his actions and is willing to work with outsiders to save him. She can first be encountered arguing with her trial-mates outside the village.

As you first approach the village, you can find Beel-Ranu argue with Depasa and Hameen-Jaa.

Beel-Ranu: "A pox on dishonor! Kishi's life matters more than stupid traditions!"
Depasa: "Kishi chose to save us. Outsiders will only make things worse."
Hameen-Jaa: "Come, Depasa. Beel has made her decision."

She can then be spoken to to find out what is happening.

"I spit at tradition and the cowardice it breeds! The Dead-Water tribe is proud. Set in its ways. But those ways will be the end of us. Even a stupid outsider can see such things!
I mean no offense."
Is there something you need help with?
"We almost died during our trial of ascension. We would have, too, except Kishi interfered and saved us.
Now, by the laws of the Naga-Kur, the Dead-Water tribe, Kishi has been sentenced to death. He should not have helped us, but I am glad he did."
They'll really kill your friend for saving your life?
"The elders stand by our traditions even as the tribe sinks into quicksand. They refuse to reach out for any aid that isn't prescribed by the tree-minder or the ka-deelith.
Perhaps you could help Kishi? As an outsider, you aren't bound by our laws."
I can try to help Kishi.
"Find Kishi's father Bhoki. Tell him you want to help. He will know how to best utilize an outsider in this matter.
Be mindful of Mewah-Jez, though. She seized Kishi because he interfered. My spines quiver just imagining her reaction to an outsider."

Or if the player is an argonian: Let me try to help Kishi instead. Your tribe's laws don't apply to me.

"You may have scales, but you aren't one of the Naga-Kur. Remember that or trouble will find you.
Look for Kishi's father, Bhoki. Tell him you want to help. Just be mindful of Mewah-Jez. Spines and scales don't make you one of the Dead-Water, ojel."

If Kishi saved your lives, why punish him for that?
"The Path of the Lily is sacred to our people. Hatchlings ascend to the rank of warrior by walking the Path, ready to defend the tribe and survive the terrors of the swamp.
Failure means death and a return to the Hist. Kishi interrupted that fate."

Your tribe prefers death to receiving a second chance?
"I attempt to speak plainly. As Mewah-Jez teaches, the swamp doesn't provide second chances, so why should we? If warriors can't succeed on their own, they endanger us all.
Still, I am grateful I am alive to explain this. Kishi made that possible."

Who is Mewah-Jez?
"Mewah-Jez is our tribe's ka-deelith—our war-teacher. She trains our novices to walk the Path of the Lily. Since she took over the responsibility, the Dead-Water warriors have become stronger and more powerful. At least, the ones that survive."

The ones that survive?
"The Path of the Lily claims more lives than ever before. Kishi and his egg-siblings were the last novices to complete the trial without injury, let alone death.
More often now, entire clutches of novices fall to the dangers encountered on the Path."

Has the trial changed in some way to account for all those deaths?
"Everything changes. The Path, the ka-deelith. Training changes, too. And expectations. Now novices die more quickly than new eggs can be hatched. Soon, the Dead-Water tribe will simply be the Dead tribe.
I think that's why Kishi dislikes Mewah-Jez."

Is that why Kishi intervened to save you
"I speculate now. Perhaps Kishi didn't want to see more novices perish due to lack of training. Or maybe his dislike of Mewah-Jez got the better of him. Or it could have been temporary insanity.
Regardless, he saved us, and I am grateful for that."

Where can I find Bhoki?
"Bhoki's home stands just within the village walls, on the western side of the Hist.
Please hurry, for Mewah-Jez took Kishi away before the night had turned to day. If Kishi hasn't been consumed by a swamp beast yet, it won't be long now."

Kishi: "Impressive. You navigate the swamp like a true warrior of the Dead-Water."
Beel-Ranu: "Didn't I say so, Kishi? There is something special about this outsider."

If spoken to she will thank you for saving Kishi.

"I raise the spine of gratitude. Thank the Hist that you came along and agreed to save Kishi.
The swamp would be a darker place if he had been devoured by a hungry predator."

After hearing Kishu's plan to show the problems with Mewah-Jez's training to Raj-Kaal Seelan, she is shocked.

"I widen my eye slits in wonder. You contradict everything the tribe taught me about outsiders! I hope the war-chief lets you take the rite of passage. And I hope you make it to the end of the Path.
For all our sakes."