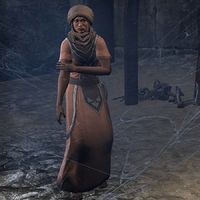 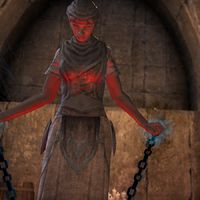 Adeena is a Redguard woman has been captured and possessed by Anexiel inside the ruins of Nilata. The circumstances which lead this started with her husband, Najan. He had found himself growing bored with his marriage and his meek wife, when he stumbled across an talisman linked to Anexiel and the daedra swiftly seduced him in disguise and convinced him to give Adeena to her to use as a vessel. After he did this, he had second-thoughts and asked Adeena's mage sister Izzara to rescue her. 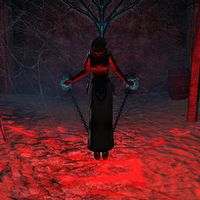 Adeena can be first encountered when she cries out once the other captives have been unbound from the ritual.

Adeena: "Anexiel? Is that you? Oh, beloved Ruptga help me, it can't be!"

When you find her she will be bound in the same way the other captives were.

Adeena: "Anexiel … please, I beg you for Morwha's mercy. Release my sister."

She can then be spoken to to find out what she meant by her plea. Adeena will then explain what happened after she was possessed and when her sister found her.

"Oh, stranger … what have you done?"
What do you mean?
"The woman you are escorting … O wayfarer, she is not my sister. The Daedra, Anexiel, has taken control of her. Can you not see it?"
Explain yourself.
"Yes, I'm sorry. Forgive me.
When my sister heard that I'd been taken by a Daedra, she came to rescue me. I was possessed for … I don't know. Hours? Days? Weeks? My memory—it's nothing but screaming and dancing shadows."
Go on.
"It's all so foggy … muddled. She drew the creature out of me and into herself. She was gritting her teeth, and screaming. Oh, it was horrible! She said she was going to put up wards before the creature overtook her. To keep the monster out."
To keep the ritual from taking place?
"Yes! Yes, wayfarer, just so. Don't let it win!"
I have been misled.

At this point, Izzara will approach and insist that it is the Daedra trying to trick you. Both sisters will then argue, both claiming that the other is possessed and try to convince you of the fact.

Izzara: "Silence, creature!"
"Adeena's the one possessed. The Daedra is trying to trick you. Don't believe its lies."
Adeena: "No. You must believe me. You can't let it finish the ritual. You can't!"
<Adeena will free herself from her magical bonds.>
Izzara: "So long as that thing lives, so does the ritual. You have to kill it to end this!"
Adeena: "Please! Listen to me! If the ritual completes, who knows how many innocent lives may be lost."

Adeena can the be questioned as to decide which one is lying, she will plea that it's not her and to think over what Izzara has previously asked you to do.

"Listen to me. Wayfarer, please. That is not my sister—not anymore. You can't believe its lies. It's … it's manipulating you!"
Why should I believe you?
"Because what I'm saying is true! Oh, I've never been good at … speaking my mind. Please, stranger, think of what you've done!"
Is there any way to prove you're telling the truth?
"If there was, I would have told you already!"
If I believed you, what should I do about Izzara?
"What's that in your hand? Is that her talisman?
In my trance I heard a voice. When it wasn't screaming, it whispered about a talisman. A talisman just like that. If you use it on my sister it might draw the creature out."
I'll consider it.

In the case you decide that Adeena is possessed and use the talisman on her, she will die and the spectral form of Anexiel will appear out of Izzara. The Daedra will then mock you for directly killing several innocents and then say she is coming for you once she regains her physical body.

However, if you conclude that it is Izzara who is possessed, Anexiel will appear over her dead body and congratulate you for figuring it out. But then she will smugly note that identical twins count as the same person in a summoning ritual before disappearing.

If Adeena survived that choice she will be distraught but she will point you in the direction to properly deal with the Spider Daedra.

"Tu'whacca's breath. What have we done …."
What happened?
"I don't know. I thought it needed me. But Izzara was my twin. We were bound by blood. That must have been enough.
Tu'whacca be kind."
I won't let it leave these ruins.
"Yes—it might still be weak from the summoning. Onsi protect you. I'll … see to my sister."
I'll do what I can.

Before you leave she while pray for your success, saying "Onsi guide you."

Once Anexiel has been killed and a meeting with a Daedric Spirit claiming to be Mephala, you can return to Adeena and tell her the news. She will be worried for your sake when you mention Mephala but she will insist on speaking with Najan one last time as he has a lot to answer for.

"Did you kill that thing?"
It's over, but something spoke to me.
"That sounds like an ill omen."
It claimed to be Mephala.
"Mephala spoke to you? The Daedric Prince? I hope for your sake that it was something else.
Let's get out of here. I can't bear to stay here any longer."
All right. Let's go.
"Have you seen my husband, Najan? We should go to him."
What will you say to him?
"In all our long years together, I never raised my voice, or called him out on a lie. I cooked his food, I cleaned his shirts, I minded his goats when he was away. I did all of this gladly. But no longer."
But you'll see him?
"Yes. I want him to know about the suffering. My suffering and my sister's. For once in my life I want him to truly see me, so he'll know what he's done."

She will then become your follower and as you escort her to Najan she will say "Have you seen my husband, Najan? We should go to him." if spoken with.

When you reach Najan, you stand back and watch the confrontation occur: 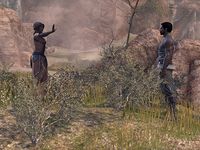 Najan: "Adeena? Oh Adeena, my love! Thank the Eight you're safe!"
Adeena: "Hold your miserable tongue, snake! I'll not hear more of your lies!"
Najan: "Adeena, it was all my fault, I know … Zeht's tears I'm so sorry! I didn't know! I didn't—"
Adeena: "You lusted after a Daedra, you filthy cur! After all I've done—all I've sacrificed! For you!"
Najan: "I know. I know I failed you … failed us. But if you'd only—"
Adeena: "No, Najan! I will not. Perhaps if you'd come and faced the monster yourself. But instead you send my sister? Izzara is dead because of you!"
Najan: "Dead? By the Eight …. Adeena, I'm sorry … I'm so sorry. Adeena? Please speak to me!"

Once you have spoken with Najan, you can ask about her plans.

"It is good to be free of him. With my sister gone, there's nothing keeping me here.
I have never seen the sea. Perhaps my days in Bangkorai are over."