The UESPWiki – Your source for The Elder Scrolls since 1995
< Oblivion: Places: Planes of Oblivion
Jump to: navigation, search 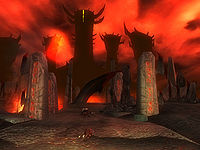 This is one of seven random oblivion worlds; in addition, the Oblivion gate in front of Leyawiin always connects to this world. The main tower in this world is one of the five random towers.

You emerge on an island, with five towers visible in front of you, as well as a dead horse. The bridge that leads from the island to the towers is of course ruined. The standard route across is through a set of random caves that go under the lava field. You will usually have to jump down a level, therefore preventing return to the Oblivion gate. Using the caves is not required: some players may opt to swim through the lava or jump across the gaps in the ruined bridge (with high enough acrobatics skill).

On the other side of the caves you will find two Spindle Shrine towers, each of which has a bridge leading to a Blood Well tower. The top level of each Blood Well tower has a set of gate controls that open the war gates separating these towers from the main tower. The east tower has a second set of controls that releases the body of a Mythic Dawn agent from its cage to fall upon the lift below.

There is an additional optional cave in this world, the Molten Halls, located east-northeast of the main tower (north of the eastern Blood Well). This cave contains five Fleshy Pods, and also provides access to the bottom levels of the two Spindle Shrine towers (which are otherwise inaccessible because the corpse mashers are broken; however, there is nothing at the bottom levels except creatures).

There are also two clusters of Fleshy Pods on the surface, if you continue along the coast past each of the Spindle Shrine towers. To the northwest there are three Fleshy Pods; to the northeast there are four. 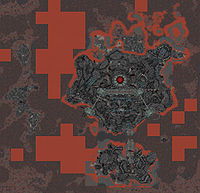 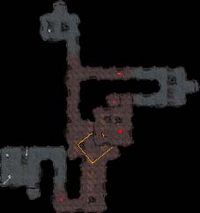 This Oblivion-related article is a stub. You can help by expanding it.
Retrieved from "https://en.uesp.net/w/index.php?title=Oblivion:Random_Oblivion_World_3&oldid=2332850"
Categories:
Hidden categories: