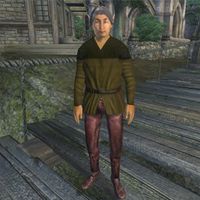 Nordinor is a skooma dealer who lives at The Fair Deal in Bravil. He is also one of only two vendors who sell skooma in Cyrodiil, the other being Shady Sam. Faelian will direct you to him if you don't have any skooma during The Lonely Wanderer quest.

He wears lower class clothing consisting of a dark green shirt, laced leather pants, and stitched leather shoes. He carries the key to The Fair Deal and a small amount of gold.

During the related quest, if you tell Faelian that you do not have any skooma, he will tell you to visit Nordinor in order to buy some: "Oh... okay. Well... You get me some skooma, and then we'll... be good friends. Okay? Okay... Nordinor.. In Bravil... He sells it... Late at night..." Similarly, if you lie to Faelian and tell him you have some skooma when you currently do not possess any, he will be somewhat upset that you lied and will then point you toward Nordinor: "Wait... You... You lied! Ohh... That's mean! Nordinor.. In Bravil... He sells skooma! Late at night... Go get me some... Okay?"