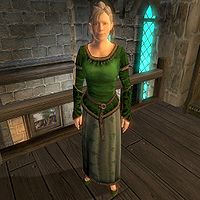 Matilde Petit, a Breton noble, is a guest at Summitmist Manor in Skingrad. Together with Dovesi Dran, Nels the Naughty, Neville, and Primo Antonius, she is involved in a private treasure hunt for a chest of gold, or so she believes. There is actually a Dark Brotherhood contract on her and the other guests, which will be given to you as the quest Whodunit?.

Matilde claims her family is well-respected in High Rock, from where it hails. According to the other guests, she is rather arrogant, and they accuse her of being greedy, claiming her family is not as well-off as it is supposed to be, and therefore she is out for gold. She is also racist towards Dunmer and Nords, and so dislikes both Dovesi Dran and Nels the Naughty. Though she seems to hold Primo Antonius as somewhat of a peer, Primo looks down on her instead. It seems she only gets along with Neville, for whom she apparently holds romantic feelings. It is apparent that Redguards are subject to positive racism from her. It becomes apparent that while she acts as a helpless old lady, she can be quite cruel and mean-spirited, which can be discovered should you discuss the death of Dovesi with her.

She wears upper-class attire consisting of a green brocade doublet, a green silk garment and a pair of green velvet shoes. She also carries some gold.

During Whodunit?, you'll be tasked to eliminate the whole party at Summitmist Manor, which includes Matilde. Ocheeva will reveal, "Each guest, at some point in the past, wronged their mysterious host. Now he's hired us to exact his revenge.", though it is unknown what Matilde did to deserve this contract on her.

When you enter the manor, Matilde will approach you and introduce herself and the other guests: "The sixth guest has finally arrived! Well it's about time! Do you know how long we've been waiting? It seems like an age! Whoever invited us here must at least know us, don't you think? In any event, we're all stuck here together, so we might as well get acquainted. The rest of us have already traded introductions. I'm Matilde Petit. The others are Nels the Naughty, Neville, Dovesi Dran and Primo Antonius. Now, who might you be? Please, tell us a little bit about yourself." You now have three choices to reply:

I'm an assassin, hired to kill you.

"Hahaha! Oh, you're a funny one! Good, I'm glad one of us has a sense of humor about all of this. It will make our time here that much more enjoyable."

My baby is sick, and we are so poor.

"Oh, you poor dear! Well, this does make things difficult for me. I want to find the gold as much as anyone, but you need it so much more than I do!"

"Yes, well... Anyway... Now that we're all here, I guess we can start looking. I'd wish you good luck, but I wouldn't really mean it."

She'll tell more about herself should you ask: "That's right. It's a Breton name. I'll have you know the Petits are one of High Rock's oldest and most respected noble families." You can also ask her about the other guests, to which she'll have different replies depending on her disposition towards you, which will be the case for most of the dialogue heard throughout the quest.

She will consequently greet you based on disposition, with a low one granting, "Now you listen to me. I don't like you. Understand? So why don't we both just stay out of each other's way, and be done with it.", a normal one, "Have you spoken to the other guests yet? I suggest you get to know everyone. Who knows how long we'll be stuck in this house together?", and finally a high one presents an opportunity to separate her from the others: "Hello, dear! Listen, I've been thinking. Why don't we form a kind of alliance? If either one of us finds the chest of gold, we split it, 50/50! With the two of us working together, we're sure to find the chest before anyone else. What do you say? Do you want to team up?" You will then have two options, the first of which will lead to another reply branch:

"Oh, wonderful! This is going to be such fun! So, any ideas where we should begin searching first?"

Try searching down in the basement.

"Ooh, good idea! Maybe the chest is hidden under the floorboards! All right, I'll head down there and start looking." (Matilde heads down to the basement)

"All right, that sounds like a fine idea! Oh, I just know you and I are going to find that gold! I have a sense about these things, you know." (nothing happens)

"Ummm... Okay, then... I guess I'll trying looking down in the basement. Maybe you could search upstairs or something, hmm?" (Matilde heads down to the basement)

"All right, dearie, I understand. If you change your mind, just let me know."

If you accepted to work together with her, she'll consequently greet you with, "Oh, hello sweetie. So, no luck yet in finding the gold, I gather? I've been looking as well, but haven't found so much as a clue."

The other guests also have their opinions of Matilde, and their responses also vary depending on their disposition towards you.

Once a guest has been eliminated, the atmosphere obviously changes, and so do the opinions of each guest. Matilde will greet you according to her disposition. A low one will grant you,"What do you want from me? For all I know, you could be the killer!", a normal one, "Oh, this is just horrible! Who could do such a thing? Who could kill a defenseless person in cold blood? Greed truly brings out the worst in people.", and a high one, "Please, sweetie, stay close to me. The killer might strike again, whoever he... or she... is."

You can discuss the other guests again, and granted they're still alive, she'll have the following to say:

Similarly, the other guests will discuss her as well:

With tension now rising, it becomes more apparent that the supposed gold is just a hoax, and everyone suspects each other more and more. Matilde's fear grows stronger, and will now greet you with, "Two people are dead, and for all I know you could be the killer!" if she dislikes you, or with, "My goodness, two of us are now dead! What's going on in this place?" if she's indifferent, or with, "I've been trying to figure out who our host might be. With two people dead, it almost seems like he set this party up just to kill us all!" if she likes you.

Her two main suspects remain Dovesi and Nels (and possibly you considering her disposition), while her trust towards Neville wanes. However, it becomes apparent that she cares more for Primo than she expressed before, and she does not suspect him the slightest.

Similarly, both Dovesi and Nels don't rule her out as the assassin. Primo is not impressed by Matilde's fear, only Neville seems to show compassion regardless of disposition.

With only two targets left, there are now only two possible suspects: the other guest, or you. Matilde's fear has grown tremendously, as she'll greet you with, "Gasp! Oh... oh, it's you. What do you want? Why are you looking at me that way?" if she has a low disposition, or "Gasp! Oh... oh. I'm sorry. I... my nerves. I just want to get out of here. Three people have been murdered! I'm so very frightened!" with a normal disposition, or with "Gasp! Oh, thank goodness it's you, sweetie! Please, don't wander too far away. I feel safe with you." if she has a high disposition.

If Dovesi is the other guest, she won't suspect you to be the killer, and may even end the conversation to attack her if you mention Dovesi with a high disposition. The same would go for Nels, though she won't attack him. If Neville is the other guest remaining, she may suspect both you and Neville. Even Primo would become the suspect if her disposition is high enough towards you.

Interestingly, all other guests would at this point attack her if you mention Matilde with a high enough disposition, believing her to be the killer.

Provided she's not the only target left alive, Matilde will discuss the deceased guests throughout the quest, as will the other guests should she perish.

If Matilde is your last target left, however, her fear will have come to a climax and she'll refuse to talk to you. Once again, her disposition will affect the way she greets you. With a low disposition, she'll assume you're the killer and will defend herself from you: "Aggh! They're dead! All dead! And you... you're the only one left. It's you! Oh, gracious, no! Stay away from me!" She won't suspect you otherwise, with a normal disposition, she'll say, "Aggh! They're dead! All of them, dead! Why? What's going on here? We need to get out of this place!" A high one will net you, "We've got to get out of here! You understand me? We're the only ones left! We need to find a way out of this house! Come on!"