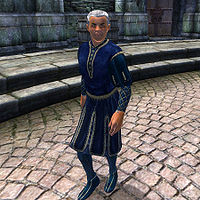 Gemellus Axius is an Imperial commoner living in the home of the Earl of Imbel in the Imperial City's Talos Plaza District. Gemellus is the manservant of Jakben, Earl of Imbel.

Gemellus leads a relatively interesting and varied life. He sleeps for eight hours from 10pm to 6am in the bedroom on the Upstairs floor then walks around the dinner table in the room nearby for two hours without ever sitting down and eating. At 8am his schedule varies. On Sundas he heads to the market and walks among the stores in the northeast of the district such as Jensine's "Good as New" Merchandise. On Tirdas and Turdas he also goes to the market, but wanders around the crossroads in the center instead. For the rest of the week he paces in the office next to his bedroom. Whatever he was up to, at midday he heads to the ground floor of Jakben's house and walks around there until 4pm before heading back to his bedroom and lingering there for a couple of hours and then eating his evening meal until 8pm. At 8pm on Sundas Gemellus heads to the Temple of the One for the evening service, and stays there until midnight, losing two hours of sleep. On every other day he simply heads back to his bedroom and waits around there until bedtime.

Gemellus wears upper-class attire consisting of a blue velvet outfit and a pair of blue suede shoes. He carries a spare red velvet garment, the key to the Earl's mansion, and a medium-sized amount of gold.

When you meet him for the first time, he will politely introduce himself and his job: "I am Gemellus Axius, Earl Jakben's manservant. He did not inform me of your visit." When asked about the Imperial City, he will talk about the Earl: "The Earl is perhaps not well known in the city. He is a private man, and keeps to himself."

During the related quest, your first task is to locate Jakben. Depending on his whereabouts, Gemellus will give you a different reply; if you meet him wandering around in the Market District, he will say: "I am Gemellus Axius, his servant. Master Imbel has his home facing the central plaza of the Talos Plaza district. He is a very private man and does not leave his home often. He has a rare skin condition that forces him to sleep during the day. If you wish to contact him, wait until nightfall. Even then, I doubt he will receive you." If you approach him inside the house, he will lie and say: "The master is not at home. He is out in the city tonight, searching for his supper. If you value your life intruder, leave before he returns." Regardless if you have met Jakben or not, you can ask Gemellus about Springheel Jak's tomb. He will then respond: "I don't know this Springheel you are asking about. However, the entrance to the family crypt is in the cellar. Take what you want, just spare me! Only the Earl has a key. I have been warned never to enter it, on pain of death."