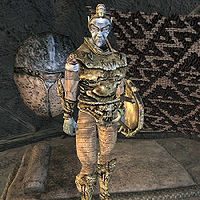 Ulath-Pal is the Ashkhan of the Erabenimsun Tribe of Ashlanders, who can be found in his yurt at their camp in the Molag Amur region. He is none too friendly; a warloving Ashlander, and is nowhere near to willing to offer you support in order to become the Erabenimsun Nerevarine. The only solution is to kill him and his followers. Like other Ashkhans, he is very skeptical about manners, and will not tolerate impoliteness from outsiders.