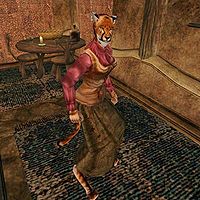 Tsiya is a Khajiit commoner and skooma-addict living in Balmora. Her friend Ernil Omoran has disappeared, and you can help her out by discovering what happened to him. In return, she will give you a free place to stay in the city, along with a little money and ten portions of moon sugar. She is wearing a common shirt with matching skirt and amulet and carries three bottles of skooma. Like all Khajiit, she can see well in the dark and can demoralize others for short periods, but otherwise knows no spells.

She lives in a two room, two story house in the middle of Balmora. She has a hammock for a bed and a few tables and counters filled with clutter scattered around her house. The only item of note is a bottle of skooma hidden in the second floor, on a counter behind a yellow glass bowl.