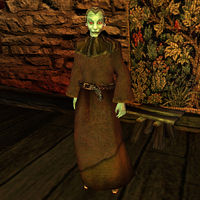 Thavere Vedrano is a Dunmer commoner who lives at the Lighthouse in Seyda Neen. Thavere was the girlfriend of the local missing tax collector, Processus Vitellius. She wears a common robe with matching shoes and pants. She also carries two standard restore health potions, as well as a small amount of leveled gold. Aside from her natural resistance to fire and the sanctuary provided by her ancestors, she knows no spells.

While the Lighthouse is probably not hers, she does live and own all the stuff there. The contents of the crates, sacks and barrels are random and cheap, including food, clutter and low-end ingredients, but there are some more interesting items too. There is a locked chest on the bottom level containing a random steel weapon and a small amount of gold. Upstairs is some bread, a bottle of greef and the Unarmored skill book The Wraith's Wedding Dowry.