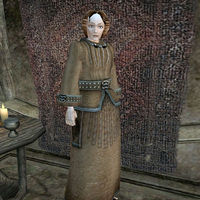 Sottilde is a Nord pawnbroker and a Wet Ear for the Thieves Guild. She can be found at the South Wall Cornerclub in Balmora. Later in the game, you might find her outside the club in Balmora, along the Odai River waterfront.[verification needed — This may be triggered by doing the Fighters Guild quests to take out the Thieves Guild bosses.]

Sottilde keeps a few arrows, throwing stars and minor weapons on hand for trade, and 250 drakes for bartering.