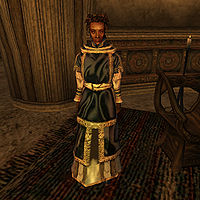 Neminda is a Redguard drillmaster and Kinsman in House Redoran. She can be found in the Ald'ruhn Redoran Council Hall entrance room. Neminda is one of the major quest givers for House Redoran.

She wears an extravagant shirt, pants, skirt, belt, shoes, and sapphire amulet. She carries an iron longsword. Like all Redguards, she has a natural resistance to poison and disease, and can boost her health, strength, agility and endurance for a short period of time; otherwise she knows no spells.